Delhi Government in Preparation To Allow Bars To Serve Liquor Till 3 AM, Says Source

The Delhi government is in preparation to allow bars in the capital city to serve liquor till 3 a.m. However, the government is yet to issue an official notification in this regard. 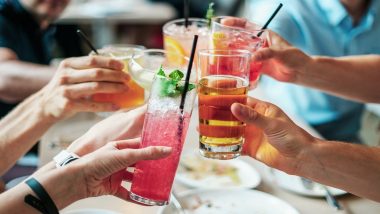 New Delhi, May 7: The Delhi government is in preparation to allow bars in the capital city to serve liquor till 3 a.m. However, the government is yet to issue an official notification in this regard.

An informed source with the government said that an order is likely to be issued soon in accordance with the Excise Policy 2021-22. The source said that the government is coordinating with the Delhi Police and other agencies for the safe implementation of the new timings. Dry Days in Delhi in 2022 List: Complete Calendar With Festivals and Events’ Dates When Alcohol Sale Will Be Prohibited in the Capital City of India.

Deputy Chief Minister Manish Sisodia, who also holds the excise portfolio, asked the department in an official note on Thursday to extend the closing time of restaurants, and to ensure that no establishment is subjected to harassment if it stays open till 3 a.m.

"Delhi government approved the New Excise Policy in November 2021 allowing the operating timings of restaurants up to 3am in consonance with the operational timings of NCR cities including Gurugram and Noida. The final implementation is being coordinated with the other agencies including Delhi Police," read the note by Sisodia.

The Delhi government in its annual budget has also announced the policy of ease of doing business to bring some cultural and nightlife activity in the national capital.

(The above story first appeared on LatestLY on May 07, 2022 01:41 PM IST. For more news and updates on politics, world, sports, entertainment and lifestyle, log on to our website latestly.com).