The police in the national capital is continuously battling with the nexus of illegal arms suppliers and now the recovery of AK-47 rifles, just 120 km from Delhi, has alerted the force. 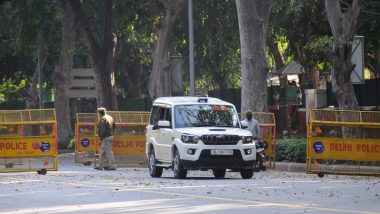 New Delhi, April 10: Back-to-back recoveries of AK-47 rifles, the most commonly used weapon by terrorists, from different parts of the country has alerted the security apparatus in the national capital.

Just five days ago, the Uttar Pradesh Police arrested a gangster with an AK-47 rifle in Shamli district. In another incident, the Railway Protection Force and Government Railway Police, during joint patrolling, recovered the same weapon along with a magazine from an Agartala-bound train at Lumding station in Assam's Hojai district.

The gangsters in Delhi-NCR or neighbouring Uttar Pradesh and Haryana do not usually use such weapons. Even the cost of an AK-47 in the black market is above the pay grades of most of the gangsters. A rifle costs nearly Rs 3 lakhs.

The police in the national capital is continuously battling with the nexus of illegal arms suppliers and now the recovery of AK-47 rifles, just 120 km from Delhi, has alerted the force.

The last time an AK-47 was found in Delhi was when the anti terror unit, Special Cell, on October 12 last year arrested a suspected Pakistan terrorist from the Laxminagar area.

Notably, the ISI had trained this terrorist, identified as Mohd Ashraf alias Ali, for at least six months in 2004. Since then he was living in India as a sleeper cell. At the time of his arrest, the police recovered an AK-47 rifle along with several other arms and ammunition.

Apart from assault rifles, the seizure reports of several arms and ammunition keep pouring in every week.

On Saturday, the Crime Branch of Delhi Police arrested the kingpin of a major illegal arms syndicate, who was manufacturing arms and ammunition at secluded hill tops of Aravalli forest area.

On March 15, the Special Cell of Delhi Police arrested two key members of interstate illegal arms supply racket and recovered 20 semi-automatic sophisticated and country made pistols from their possession.

Before the Republic day, the Delhi Police busted several illegal arms supply syndicates that may have emerged as a security threat in Delhi.

From January 20-25, the police arrested six notorious arms dealers who used to supply illegal arms and ammunition to the gangsters of Delhi, out of which the last was found to have illegal financial links with subversive modules based abroad.

Fortunately, the national capital has not seen any seizure of AK-47 rifle apart from the one recovered from the Paksitani terrorist on October 12, 2021.

However, with the IED recovery case still going on, the recovery of an assault rifle from a neighbouring state is likely a cause of concern.

(The above story first appeared on LatestLY on Apr 10, 2022 04:55 PM IST. For more news and updates on politics, world, sports, entertainment and lifestyle, log on to our website latestly.com).