Delhi Police Personnel in PM Security 'Faints' Due to Heat at Red Fort During Independence Day 2021 Event, Rushed to Hospital

A Delhi Police personnel deployed in the Prime Minister's security unit at the Red Fort during the Independence Day event on Sunday, fainted 'due to the heat'. 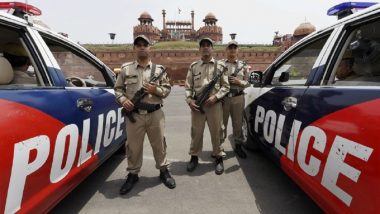 New Delhi, Aug 15: A Delhi Police personnel deployed in the Prime Minister's security unit at the Red Fort during the Independence Day event on Sunday, fainted 'due to the heat'.

The incident occurred after Prime Minister Narendra Modi concluded his speech on 75th Independence Day. As people started moving out, the policeman fell unconscious near the entry gate number 4C.

Other personnel immediately jumped into action and rushed him to the Indian Army Camp at the Red Fort for medical aid. India Responding to Terrorism, Expansionism With Great Courage, Says PM Narendra Modi on Independence Day.

A woman police of the same security unit told IANS, "We are from Delhi Police but our dress is plain safari suit as we are part of the Prime Minister's security. We are always deployed at PM's programmes," said the Delhi Police personnel.

The actual cause of the policeman collapsing was yet not clear, senior Delhi Police officials said the personnel collapsed due to heat. He was later taken to a hospital in an ambulance.

(The above story first appeared on LatestLY on Aug 15, 2021 01:17 PM IST. For more news and updates on politics, world, sports, entertainment and lifestyle, log on to our website latestly.com).