A Delhi court on Monday once again deferred the pronouncement of its order on the bail application of former Jawaharlal Nehru University (JNU) student Umar Khalid in a case related to the alleged "larger conspiracy" behind Delhi riots. 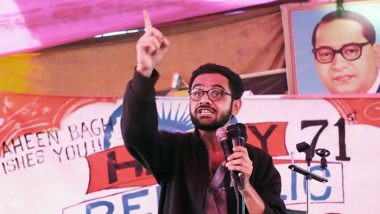 New Delhi, March 21: A Delhi court on Monday once again deferred the pronouncement of its order on the bail application of former Jawaharlal Nehru University (JNU) student Umar Khalid in a case related to the alleged "larger conspiracy" behind Delhi riots.

Additional Sessions Judge Amitabh Rawat of Karkardooma court, which was set to deliver its verdict in the matter on Monday, deferred it following the filing of written notes by the prosecution. The order which was to be originally pronounced on March 14 had been listed for March 21. On March 3, a bench had reserved its order after hearing the submissions of parties in the matter. Delhi Police Arrests 49-Year-Old Woman With 23 Grams of Heroin, Valued Over 20 Lakh, Says Report.

Opposing the bail plea, Special Public Prosecutor (SPP) Amit Prasad argued on the relevance of the speech given by Umar Khalid in Amravati in February 2020. He said the bail application was rejected on February 11, pointing out that the announcement of Donald Trump visiting India came on the same day.

During the course of the hearing, Khalid's counsel, opposing the charges under the Indian Penal Code and UAPA, termed the charge sheet a "work of fiction". He argued that the speech given by Khalid was about Gandhi, harmony, and the Constitution, and it is not a crime. NIA Files Unlawful Activities Prevention Act (UAPA) Case Against Underworld Don Dawood, D-Company.

After the submissions, the court had reserved the order. Khalid, one of the accused in the conspiracy case, has been booked under the anti-terror law -- Unlawful Activities (Prevention) Act (UAPA).

The riots broke out in northeast Delhi in February 2020 after clashes between anti-CAA (Citizenship Amendment Act) and pro-CAA protesters took a violent turn. The mayhem, which coincided with then US President Donald Trump's maiden trip to India, saw over 50 people lose their lives and over 700 injured.

(The above story first appeared on LatestLY on Mar 21, 2022 02:55 PM IST. For more news and updates on politics, world, sports, entertainment and lifestyle, log on to our website latestly.com).