Customs officials at the courier terminal of the Air Cargo Complex at Bengaluru's Kempegowda International Airport (KIA) seized over 5 kg of ephedrine drug concealed inside 43 wedding invitation cards on Saturday. 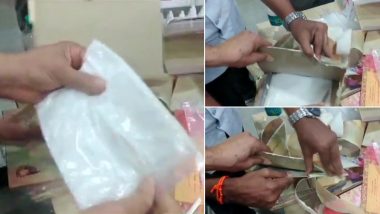 Bengaluru, February 23: Customs officials at the courier terminal of the Air Cargo Complex at Bengaluru's Kempegowda International Airport (KIA) seized over 5 kg of ephedrine drug concealed inside 43 wedding invitation cards on Saturday. The ephedrine drug, which is estimated to be worth Rs 5 crore, was found concealed in 86 pouches placed inside the wedding invitation cards. The contraband drug was being smuggled to Australia by a Madurai-based exporter. Amazon Courier Packages From Canada Used For Shipping Drugs in India, Bengaluru Police Busts International Mafia.

In a statement, Joint Commissioner of Customs MJ Chetan said: "During the verification of the export consignments at the courier terminal, the officials of the Central Intelligence Unit, Air Cargo Complex, detected the concealed powder. Detailed examination of the package revealed a huge racket in drug peddling. The package had 43 wedding invitation cards and a few garments. The two-sided, foldable cards were made of cardboard. The officials suspected the powder was packed in the cards." Fentanyl A More Dangerous Drug Than Heroin in the US Says CDC: Facts About This Deadly Opioid.

Officials found the package unusually heavy for wedding cards and opened them. They then found crystalline powder packed in polythene pouches, which were concealed between the cardboard layers on each side of the cards. Ephedrine is a controlled substance under the Narcotic Drugs and Psychotropic Substances (NDPS) Act. The courier company, which sent the package, shared the CCTV footage of the sender and other details with the Customs Department.

(The above story first appeared on LatestLY on Feb 23, 2020 09:54 PM IST. For more news and updates on politics, world, sports, entertainment and lifestyle, log on to our website latestly.com).