Tens of thousands of farmers braved water cannons and tear gas shells used by the Haryana government. They break through police barricades at several places on the Punjab-Haryana border to march towards the national capital to protest against the recently enacted farm laws. 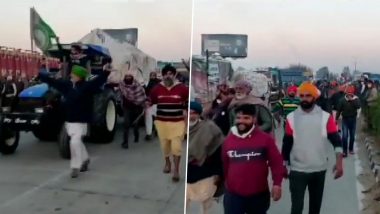 New Delhi, November 27: After being hit by water cannons and tear gas, thousands of farmers are now heading towards Delhi. Tens of thousands of farmers braved water cannons and tear gas shells used by the Haryana government. They break through police barricades at several places on the Punjab-Haryana border to march towards the national capital to protest against the recently enacted farm laws.

According to reports, more than 50,000 farmers from Punjab and Haryana are standing at the Delhi-Haryana border. Samyukt Kisan Morcha and All India Kisan Sangharsh Coordination Committee in a statement said, "It is expected that more than 50,000 farmers will be standing at the Delhi border by today evening. The numbers are expected to swell through the night as thousands of tractors and trolleys are carrying farmers, women and children from interior areas of Punjab." Police used tear gas shells to disperse protesting farmers at Singhu border. Farmers Protest: Punjab Farmer Unions Change Strategy, to March to Delhi Via Other Routes, Tear Gas, Water Canons Used at Protesting Farmers at Shambhu Border (Watch Video).

Farmers are headed to Delhi as part of their protest march against Centre's Farm laws. pic.twitter.com/Z0yzjX85J5

Meanwhile, the interstate vehicles are advised to take Western/Eastern peripheral expressway. In a major late-night development, the Bharti Kisan Union Ekta-Ugrahan also decided to start their journey from the Khanauri border in Punjab's Sangrur district on Friday. BKU-Ugrahan President Joginder Ugrahan said: "If we are not allowed to cross Haryana and head towards Delhi, our protest destination will be the border points for a week."

The farmers are demanding that the ruling dispensation should repeal the controversial farm laws. Meanwhile, heavy security has been deployed at the Delhi-Haryana border. Sand-laden trucks and water cannons have been stationed at the Singhu Border to stop the protesting farmers. Earlier today, farmers heading towards Delhi against the Centre's recently passed farm laws halted near the Panipat toll plaza at the National Highway. Farmers Protest Against Farm Laws: Delhi-Haryana Borders Sealed to Prevent Farmers From Marching Towards National Capital, CRPF Deployed.

As per the police estimates, around 300,000 farmers from both states are set to reach Delhi. The farmers affiliated to 33 organisations are part of the United Farmers Front, an all-India body of over 470 farmers' unions that will participate in the indefinite protest in the national capital. The political war also erupted due to the farmers' protest. Haryana Chief Minister Manohar Lal Khattar blamed Punjab CM Captain Amarinder Singh for "inciting the farmers". The Delhi Police has already asked the farmers not to enter Delhi as they don't have permission to protest in the city.

(The above story first appeared on LatestLY on Nov 27, 2020 09:00 AM IST. For more news and updates on politics, world, sports, entertainment and lifestyle, log on to our website latestly.com).