Considering the sharp hike in prices of petrol and diesel, Union Minister of State for Finance, Anurag Thakur, on Monday suggested the states to think about reducing taxes on petroleum products. 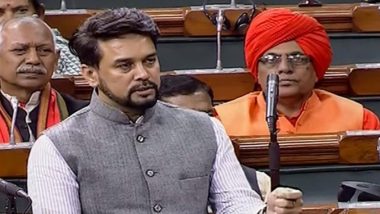 New Delhi, March 15: Considering the sharp hike in prices of petrol and diesel, Union Minister of State for Finance, Anurag Thakur, on Monday suggested the states to think about reducing taxes on petroleum products.

In reply to a question in the Lok Sabha, Thakur said the Central government is ready to consider the idea of reducing tax on petrol and diesel, but all the states should also consider the matter.

"The state governments should reduce taxes on petrol. We (the Centre) will also try to reduce tax on petrol. Both the Centre and the states need to think about it (reducing taxes on petrol)," the minister said. Fuel Price Hike: Maharashtra Govt Can Cut Taxes, Reduce Fuel Prices and Provide Relief to the Common Man, Says Devendra Fadnavis.

Thakur said the government is ready to discuss the issue to bring petroleum products under the ambit of Goods and Services Tax (GST). He said the Centre levies excise duty on petrol and diesel, while the states levy VAT.

The minister said the price of crude oil was around $19 per barrel in March last year, and currently it is around $65 per barrel.

Asked why the government is not bringing petroleum products under GST as promised by the then Finance Minister late Arun Jaitley, Thakur said no state has so far given a proposal for the same.

"If any state feels that petroleum products should be brought under GST, the Centre has no objection in discussing the matter," the minister said.

(The above story first appeared on LatestLY on Mar 15, 2021 05:11 PM IST. For more news and updates on politics, world, sports, entertainment and lifestyle, log on to our website latestly.com).