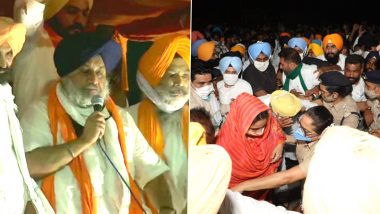 Chandigarh, October 1: Former Union MInister and Shiromani Akali Dal (SAD) leader Harsimrat Kaur was arrested while trying to enter Chandigarh on Thursday night. Harsimrat Kaur was leading a protest against recently-enacted farm laws. Her husband and SAD leader Sukhbir Singh Badal was also detained in Chandigarh while leading a "Kisan March". The Shimoni Akali Dal this morning began three separate "Kisan marches" against the new farm laws. Farm Bills: What Are The 3 Legislations Brought by Modi Government? Why Are Farmers Protesting? All You Need to Know.

Sukhbir Singh Badal was leading a march from Amritsar to Chandigarh. Harsimrat Kaur Badal attempted to enter Chandigarh from Bathinda. The third march was led by SAD leaders Prem Singh Chandumajra and Daljit Singh Cheema started from Anandpur Sahib. "Arrested for raising farmers' voice, but they won't be able to silence us," Kaur tweeted. Police resorted to lathi-charge and used water cannons to disperse SAD workers near Mullapur barrier. MSP And Farm Bills: PM Narendra Modi Reiterates 'There Will Not Only Be MSP in Country But Also Freedom For Farmers to Sell Their Produce Anywhere'.

Protests by farmers have been ongoing for the past few days over the passage of three laws – The Farmers Produce Trade and Commerce (Promotion and Facilitation) Act, 2020, The Farmers (Empowerment and Protection) Agreement on Price Assurance and Farm Service Act, 2020, and The Essential Commodities (Amendment) Act, 2020.

The SAD has pulled out of the Bharatiya Janata Party-led National Democratic Alliance (NDA) over the farm laws. The Punjab-based party was the third major NDA member to leave the grouping after the Shiv Sena and the Telugu Desam Party (TDP).

(The above story first appeared on LatestLY on Oct 01, 2020 11:21 PM IST. For more news and updates on politics, world, sports, entertainment and lifestyle, log on to our website latestly.com).