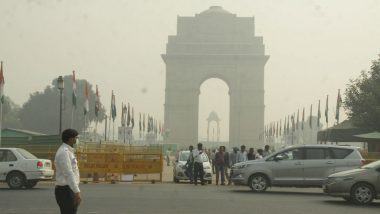 New Delhi, August 11: Ahead of Independence Day 2020, the Delhi Police on Tuesday issued a traffic advisory for people of the national capital. In its notification, the Delhi Traffic Police said that vehicles without parking or access levels will not be allowed near the Red Fort area. Also, cars will not be allowed on eight roads between 4 am-10 am on August 13 and August 15. Security has been beefed up in the national capital for the 74th Independence Day this year. Preparations are underway in full fervour for the full dress rehearsal will take place on August 13.

The Joint Commissioner of Police (CP) Traffic, Delhi Police, Narendra Singh Bundela said that there will be security restrictions and diversions on both the days in view of the 74th Independence Day celebration in the national capital. The roads which will be closed for movement of vehicles include, Netaji Subhash Marg from Delhi to Chata Rail, Lothian Road from Delhi GPO to Chata Rail, Shyama Prasad Mukherjee Marg from SC Sen Marg to Yamuna Bazar Chowk, Chandini Chowk road from Fountain Chowk to Red Fort. Indian Independence Day 2020 Date, Theme And Significance: Know The History And 15th of August Celebrations Related to Swatantrata Diwas.

As security has been tightened in the national capital ahead of the Independence Day, the Delhi Police has started checking vehicles of commuters since Monday. According to the notification, Nishad Raj Marg from Link Road to Netaji Subhash Marg, Esplanade Road that connects link road to Netaji Subhash Marg, Ring Road from Raj Ghat to ISBT and outer ring road from ISBT to IP Flyover, will also remain closed according to Bundela.

(The above story first appeared on LatestLY on Aug 11, 2020 11:01 PM IST. For more news and updates on politics, world, sports, entertainment and lifestyle, log on to our website latestly.com).