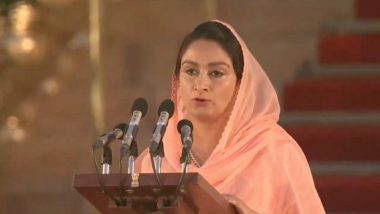 On Thursday, Harsimrat had resigned from the Union Cabinet, displaying her opposition to the three agriculture-related bills. "The President of India, as advised by the Prime Minister, has accepted the resignation of Harsimrat Kaur Badal from the Union Council of Ministers, with immediate effect, under clause (2) of Article 75 of the Constitution," according to a release from Rashtrapati Bhavan. Harsimrat Kaur Badal’s Resignation: BJP Strategists Failed to Prevent SAD Leader’s Exit Over Farm Bills.

"Further, as advised by the Prime Minister, The President has directed that Shri Narendra Singh Tomar, Cabinet Minister, be assigned the charge of the Ministry of Food Processing Industries, in addition to his existing portfolios," it said.

Earlier, Harsimrat's husband and SAD president Sukhbir Singh Badal said that his wife will resign over the three farmers' bills brought in the Parliament by the government. The bills are aimed at replacing the ordinances. (ANI)