The report found that 58,880 incidents of rioting were reported, which means on an average the country witnessed 161 rioting cases on a daily basis. 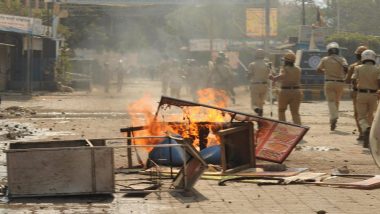 New Delhi, October 22: After a delay of two years, the annual Crime in India Report 2017 was published by the National Crime Records Bureau (NCRB) on Monday. As per the NCRB report, India saw a decline in riots in 2017, however, the number of riot victims increased. The report found that 58,880 incidents of rioting were reported, which means on an average the country witnessed 161 rioting cases on a daily basis.

According to the report, of the total riots reported in 2017, communal and sectarian riots accounted for 723 and 183 incidents respectively. There were 805 riots due to caste conflict and 1909 riots occurred due to political reasons. As per the report, the maximum incidents of riot were reported from Bihar - 11,698, followed by Uttar Pradesh - 8,990 and Maharashtra - 7,743. While Bihar was the rioting capital of India in 2017, Tamil Nadu topped the number of riot victims.

In 2017, Tamil Nadu saw 1,935 rioting cases but the number of victims was 18,749, suggesting that riots in Tamil Nadu were much intense and violent in comparison to riots in other parts of the country.

(The above story first appeared on LatestLY on Oct 22, 2019 04:13 PM IST. For more news and updates on politics, world, sports, entertainment and lifestyle, log on to our website latestly.com).