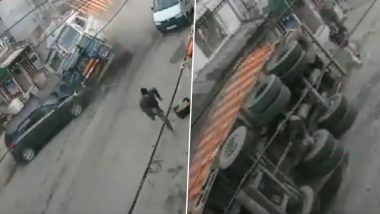 Srinagar, February 26: In a horrific incident, a speeding truck full of onions turned turtle in Jammu and Kashmir after colliding with vehicles on a National Highway. According to a tweet by ANI, the accident took place after the truck collided with a car and a bike in Samba district. Reports inform that the incident took place on February 23 after the driver lost control of the truck on the Jammu-Pathankot National Highway. A case has been registered. Further investigation is underway.

The terrific incident was caught on camera. A close look at the visuals show a man walking on the street when an overspeeding truck came from one side and rammed into a car coming from the opposite side. The truck driver was riding the vehicle at the time of the accident due to which, the truck turned turtle. Jammu and Kashmir: 2 Killed, 28 Injured As Bus Falls into Gorge at Ramnagar-Udhampur Road.

#WATCH Jammu and Kashmir: An onion laden truck rams into a car and a bike after driver loses control of the truck while taking a turn on the Jammu-Pathankot National Highway in Samba. All the people involved in the incident sustained minor injuries. (23.02.20) pic.twitter.com/OiKd4MxUY6

According to reports, the air bags of the hatchback opened on time, saving the life of the driver. Following the horrific accident, locals gathered at the spot and ran to help them. The drivers of both the vehicles escaped with minor injuries. In the last week, a similar accident was reported from Kathua district in which at least 9 people were killed and five others were seriously injured after the vehicle in which they were travelling fell into a gorge in Malhar.

(The above story first appeared on LatestLY on Feb 26, 2020 04:34 PM IST. For more news and updates on politics, world, sports, entertainment and lifestyle, log on to our website latestly.com).