In their letter, the JNUTA has accused Kumar of "violating reservation policies in admission", apart from making arbitrary appointments and exhibiting "blatant disregard" towards the concern raised by the students. 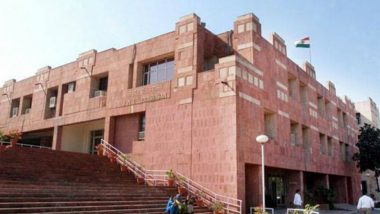 New Delhi, Aug 30: The faculty of Jawaharlal Nehru University (JNU) have written to the Minister for Human Resource and Development, Prakash Javadekar, demanding the removal of Vice Chancellor M Jagadesh Kumar by September 5, which is observed as Teachers' Day.

The letter, written by JNU Teachers' Association (JNUTA) president Sonajharia Minz and secretary Sudhir Kumar Suthar, has been signed by nearly 90 per cent of the teaching staff.

The move comes in the backdrop of the JNUTA conducting a referendum in the varsity, to ascertain whether the faculty wanted the V-C removed. Notably, 90%, or 279 teachers have voted for his removal.

In their letter, the JNUTA has accused Kumar of "violating reservation policies in admission", apart from making arbitrary appointments and exhibiting "blatant disregard" towards the concern raised by the students.

Read full text of the letter written by JNUTA to the HRD Minister:

The teachers of Jawaharlal Nehru University are writing to you to draw your attention to the prevailing crisis of governance in JNU—recognised as one of India’s best universities—caused due to the irrational administrative behaviour of the present Vice Chancellor, Professor M Jagadesh Kumar.

Sir, we write to you today with the demand—that Professor M Jagadesh Kumar be relieved of the position of the Vice Chancellor of this University. We would like to bring to your attention that in a referendum on 7th August 2018, organized by the Teacher’s Association, the faculty of the University have voted overwhelmingly in favour of removal of the VC. In a subsequent General Body meeting a resolution was passed with regard to 5th September 2018 as the last date of VC’s removal.

They have done so because the experience of the last two and a half years has convinced them that Professor Kumar is solely responsible for several acts of commission and omission on the part of the JNU Administration which are destroying this premier public university. The faculty, through the JNUTA or in and through various institutional fora, have repeatedly done their best to draw the attention of Professor Jagadesh Kumar to these and their adverse consequences for the institution. He has, however, ignored all these opinions and instead misused the power of authority by intimidating and penalising members of the faculty through whatever means he can muster.

We wish to inform you, Sir, that the JNUTA had conducted a public inquiry in October 2017 which had found Professor Kumar guilty on seven charges based on a mountain of evidence. These were: 1) Repeated Violation of Statutory Provisions and Obligations; 2) Undermining the Integrity of the Faculty Selection Process; 3) Damaging the Interests of Students aspiring for research, wasting public money and violating CEI Act and Reservation Policy; 4) Harassing Teachers and Denying them their Legitimate Dues; 5) Assaulting Democracy and Promoting Authoritarianism; 6) Undermining JNU’s Anti-Sexual Harassment Policy; and 7) Displaying a Callous Attitude towards Najeeb Ahmed and Failing to Protect Students’ Interests.

Professor Kumar, however, chose not to take any steps towards course correction and has instead only added more to the tale of his misdeeds.

Sir, we are pained to report to you that Professor Kumar has broken down all deliberative processes in the University and reduced its authoritative bodies like the Academic Council to a farce. Through his top-down style of functioning he has tried to inflict a mindless regimentation and bureaucratization of the University’s academic life even as the essential elements of that life—like the library and viva-voce examinations are being throttled on the pretext of lack of funds. The flurry of mindless new rules and regulations in turn is promoting anarchy. All entrance examinations are being forced into an online mode without any assessment of its academic merit and implications for the ability of students across the country and from diverse social and economic backgrounds to appear in the exam. The academic life of the University today is struggling to stay afloat in the face of the calamitous leadership.

The cut in admissions to the University’s programmes in the last two years has already led to a tremendous wastage of public funds. The Administration’s arbitrariness under Professor Kumar, and its inability to resolve any genuine grievances, have added to this by embroiling the University in several avoidable court cases. This enormous wastage is now being coupled with the attempt to take a large loan of Rs. 515 crores from the HEFA (Higher Education Financing Agency)—where he has decided unilaterally to impose a liability that the University will carry long beyond his term in office.

Professor Kumar has similarly signed an MoU unilaterally in which he has committed the University, among other things, to raising fees and user charges.

We would also like to draw your attention, Sir, to the arbitrary appointment of Deans and Chairpersons, where he has shown an increasing disregard for the time-tested convention of rotation by seniority. For this he believes that he does not owe any explanation to anyone. His administrative functioning is guided by a complete lack of accountability to any stakeholder of this university, especially the teachers.

He is personally responsible for preventing and denying several teachers the promotions they deserve. Applications of teachers for leave and for assistance for participating in conferences have been dealt with arbitrarily—blocking their genuine academic pursuits even as administrative sloth is overlooked.

He is not even able to ensure that the University meets its contractual obligations to pay salaries to all those from whom it takes work. Appointments and renewals of the terms of wardens is also characterized by extreme arbitrariness.

The collective of SC/ST teachers has expressed to him their grievance that they are being discriminated and denied constitutional justice by this Administration—Professor Kumar has only compounded this by his refusal to acknowledge and redress these complaints. In more ways than one, he is conducting a witch-hunt against all those who do not pay obeisance to the Administration and this has already affected an enormous number of the University’s faculty.

Sir, we are also very alarmed that Professor Kumar’s callous disregard for students and their welfare, reflected in the matter of the disappearance of Najeeb Ahmed, has been repeated through his criminal silence on the life-threatening attack on Umar Khalid. This follows from the role of the Professor Kumar’s administration in creating the climate for such attacks. This Administration must now be holding the dubious record of imposing the largest quantum of monetary and other penalties on students exercising their right to protest, through processes whose credibility has been questioned by recent decisions of the Honourable High Court of Delhi.

Professor Kumar’s treatment of cases where there are allegations of sexual harassment is marked by extreme callousness, and the University is seeing the adverse consequences of the dismantling of the GSCASH. He has done more damage than any previous Administration to the ability of the University to attract talented students from all parts of the country and from all backgrounds. Under his leadership, even the implementation of the constitutionally mandated reservation in admissions has been honoured more in the breach.

It is strange that while Mr Kumar has happily collected awards for the JNU from the President of India, he has decided not to defend this university even as it was being maligned on various public platforms like news channels or by JNU administration’s own lawyers in and outside the court premises. If he cannot defend JNU, in whose glory he basks, he has no moral standing to continue to administer it.

After all of this, it is impossible for the faculty of JNU to visualise any possibility of working with Professor M. Jagadesh Kumar or with an Administration led by him. We simply cannot participate in a process of destruction of an institution that belongs to the people of the country and must remain committed to serving them and their aspirations for progress. Sir, we feel, it is our moral duty to resist with all our might such destruction and we are only discharging our duty to the nation today by asking him to step down from the position.

Sir, you are aware that Vice-Chancellors can never by themselves make an institution. We would like to communicate you that Professor Kumar has completely lost the confidence of those whom he is required to lead. We request you to relieve Professor M Jagadesh Kumar of the office he is presently holding (the position of Vice-Chancellor of Jawaharlal Nehru University).

(The above story first appeared on LatestLY on Aug 30, 2018 05:12 PM IST. For more news and updates on politics, world, sports, entertainment and lifestyle, log on to our website latestly.com).