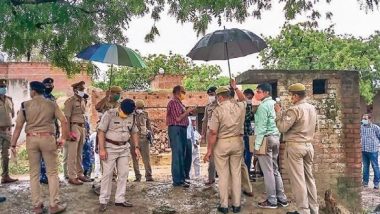 Lucknow, July 20: Days after the encounter of history-sheeter Vikas Dubey, Uttar Pradesh Police on Monday arrested Dubey's aide Jaykant Vajpayee and the latter's friend Prashant Shukla. Police have stated that both Vajpayee and Shukla were involved in Kanpur encounter where eight Police personnel had lost their lives.

Following the arrest, the UP Police have registered FIR against Vajpayee and Shukla under multiple sections of the IPC, Criminal Law Amendment Act and Arms Act. Both of have been accused to be co-conspirators of July 3 encounter at Bikru village in Kanpur. Vikas Dubey Encounter: Post-Mortem Report States 'Hemorrhage And Shock Due to Ante-Mortem Firearm Injuries' as Cause of UP Gangster's Death.

Here's the report about Vajpayee and Shukla's arrest:

#VikasDubey's aide Jaykant Vajpayee & the latter's friend Prashant Shukla arrested for their involvement in #KanpurEncounter where eight Police personnel had lost their lives. FIR registered against them under multiple sections of the IPC, Criminal Law Amendment Act and Arms Act.

Earlier in the day, the post-mortem report of history-sheeter Vikas Dubey arrived. It mentioned that 'haemorrhage and shock due to ante-mortem firearm injuries' as the cause of Dubey's death. The gangster was arrested in Madhya Pradesh's Ujjain on July 9. However, he was killed in Kanpur suburbs in an encounter after he tried to flee after the police van overturned.

(The above story first appeared on LatestLY on Jul 20, 2020 09:41 AM IST. For more news and updates on politics, world, sports, entertainment and lifestyle, log on to our website latestly.com).