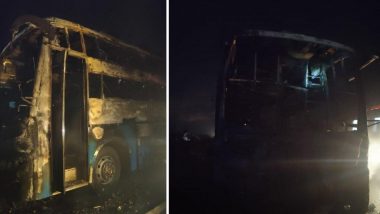 Bengaluru, August 12: In a tragic incident, at least five people were burnt alive after a bus travelling from Vijayapura to Bengaluru caught fire on the highway in Chitradurga district of the state in the early hours of Wednesday. The bus was reportedly carrying 32 passengers when the incident took place in Hiriyur near Chitradurga district after their bus caught fire on National Highway 4.

The fire took place after the bus reportedly developed some engine trouble. The injured have been shifted to a district government hospital and police are probing the matter. Bengaluru: 2 Dead, 60 Cops Injured as Violence Breaks Out Over Inciting Social Media Post, Accused Naveen Arrested For Sharing Derogatory Facebook Post.

5 People, Including a Baby, Charred to Death:

Karnataka: Five people, including a baby, charred to death and 27 injured, last night in Hiriyur near Chitradurga district, after their bus caught fire on National Highway 4. The injured have been shifted to hospital. pic.twitter.com/Je1PxEbTv4

In another incident, huge violence erupted in Bengaluru over inciting Facebook post which claimed two lives and more than 60 police personnel were injured in the clash. The accused Naveen was arrested for sharing derogatory posts on social media.

(The above story first appeared on LatestLY on Aug 12, 2020 08:48 AM IST. For more news and updates on politics, world, sports, entertainment and lifestyle, log on to our website latestly.com).