Lockdown 5.0 Guidelines: Here's What Reports Are Saying About What Can Happen After May 31, 2020

The fourth phase of lockdown is slated to end on May 31. As COVID-19 cases in country are still on the rise, several media reports state that the Centre will likely extend the lockdown by two more weeks while some reports say that the fifth lockdown will not be as strict as compared to the earlier ones. 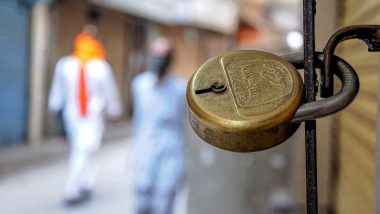 New Delhi, May 28: As the fourth phase of the lockdown enters its final week, several media reports have underlined the possible relaxations, plans for the coming week and the possible guidelines that the government may issue for lockdown 5.0 after the end of the current phase of shutdown. The fourth phase of lockdown is slated to end on May 31. As COVID-19 cases in country are still on the rise, several media reports state that the Centre will likely extend the lockdown by two more weeks while several other media reports claim that lockdown 5.0 will not be as strict as compared to the earlier ones.

According to a report by News 18, lockdown 5.0 is likely to continue the restrictions on malls, cinema halls, schools, colleges and other educational institutions. The report adds that gyms, which were ordered to be shut till lockdown 4.0, may be allowed to operate this time except in the containment zones.

According to a report by india.com, the Centre has already begun planning and preparing the roadmap ahead for another extension. The reports stated that during the fifth phase, the states will be given the powers to decide the activities based on ground-level COVID-19 situation. Opening of shopping malls may get a nod this time. Karnataka and Lucknow said malls will be opened after May 31. The report further added that as Railways and domestic flights commenced operations already, Delhi Metro is likely get a green signal from June 1. Lockdown 5.0 Details Announced by MHA? Report Claiming to Have Details of Fifth Phase of Lockdown Fact-Checked by MHA.

A report by Deccan Herald stated that Lockdown 5.0 is likely to begin from June 1 in cities that have been worst-hit by coronavirus. The report states that the fifth phase of lockdown will ease restrictions in most parts of the country and open transport services like metro and buses. Moreover, religious institutions are likely to be opened with social distancing norms with a strict ban on mass gatherings and religious festivals. Karnataka has already said that it favours reopening of religious places in the state including temples and churches from June 1. Schools and Colleges Permitted to Reopen in All States? MHA Debunks Fake News, Says Educational Institutions Will Remain Closed Across India.

Several media reports state that there are speculations that Prime Minister Narendra Modi may address the nation on lockdown extension during his 'Mann ki Baat' programme, that is scheduled for May 31. However, there has been no confirmation on what the Prime Minister may announce. On Wednesday, a fact check by the Ministry of Home Affairs (MHA) had stated that a media report claiming to have got details from MHA sources om Lockdown 5.0 was fake and misleading. "All claims made therein are mere speculations by the reporter. To attribute them to MHA is incorrect and being irresponsible", the MHA said.

(The above story first appeared on LatestLY on May 28, 2020 02:00 PM IST. For more news and updates on politics, world, sports, entertainment and lifestyle, log on to our website latestly.com).