The heavy rainfall over the past few days led to massive flooding, especially in the Konkan areas, leaving people helpless. The death toll in flood-ravaged Maharashtra shot up to 164 on Monday. The State Disaster Management Authority said that about 100 people are still missing in the affected regions. 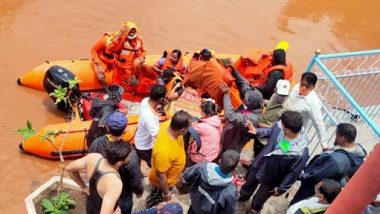 Mumbai, July 26: Incessant rainfall in parts of Maharashtra including Chiplun, Khed, Sangli, Ratnagiri, and several other regions crippled normal life and left a trail of destruction in the Konkan towns. The heavy rainfall over the past few days led to massive flooding, especially in the Konkan areas, leaving people helpless. The death toll in flood-ravaged Maharashtra shot up to 164 on Monday. The State Disaster Management Authority said that about 100 people are still missing in the affected regions. Maharashtra Floods: Shops, Cars, Police Station Partially Submerged in Water in Sangli (Watch Video).

As rainfall continued, thousands of people, stranded on rooftops or upper floors of their houses, screaming for help. Houses, roads, vehicles and commercial establishments submerged in floodwater in several areas of  Kolhapur and Ratnagiri districts. So far, over 2.29 lakh people have been evacuated to safer areas after their homes were submerged in floodwaters. This is believed to be the biggest flood rescue operation in the state in decades. Crocodile Seen on Roads of Sangli District in Maharashtra After Water Level of Krishna River Rises Due to Heavy Rainfall (Watch Video).

The worst-hit districts were Kolhapur, Raigad, Sangli, Ratnagiri, Satara, Sindhudurg, Mumbai, and Thane, hitting a total of 890 villages. As many as 50 people were injured and are undergoing treatment at various hospitals in Raigad, Ratnagiri, Sindhudurg, Sangli, Satara, and Kolhapur.  A number of landslides and landslips were reported from several places across the state, burying scores with many more reported missing.

On Sunday, there was some respite from the torrential rains. The flood-ravaged districts presented a grim scenario with people grappling to rebuild their lives and return to normalcy. The unprecedented rainfall in the state rose the water levels to more than 15-20 feet.

Over a dozen hillsides and landslips have been reported in several districts of the state in which buried scores and many more reported missing. Most of the roads in these affected regions are still shut for vehicular movement.

Armed Forces Deployed in Many Areas

In the wake of the grim situation, teams of the Indian Army, Navy, Air Force, Coast Guard, NDRF, and SDRF have been deployed in various areas. The teams have been rescuing people, and providing food or medicine and other aid materials to the victims, said the SDMA. Moreover, the NDRF and ICG teams were deployed to rescue them while IAF choppers dropped food and medicine packets.

In the wake of the devastation caused by the deluge, Chief Minister Uddhav Thackeray visited the affected towns and assured all support to affected people. The Chief Minister sought the Centre's help for devising a 'long-term' measure to mitigate the frequent crises of devastating floods which play havoc in the state. Maharashtra, Karnataka Floods: PM Narendra Modi Speaks to Uddhav Thackeray, BS Yediyurappa, Assures Help in Flood Relief Operations.

The Maharashtra government has also sanctioned Rs 2 crore each for Raigad and Ratnagiri for relief operations and Rs 50 lakh for the other affected regions where water levels have started receding and cleaning operations have been taken up.

(The above story first appeared on LatestLY on Jul 26, 2021 11:07 AM IST. For more news and updates on politics, world, sports, entertainment and lifestyle, log on to our website latestly.com).