Gulati, who was also called Dadaji or Mahashayji, was a fifth-grade school dropout. There are years of his hard work, dedication and perseverance behind the rise of MDH. From a 'tanga wala' to a billionaire, his journey is truly inspiring. 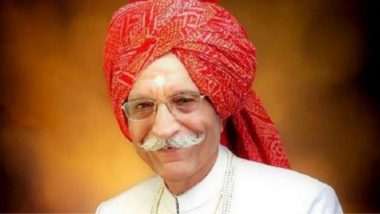 New Delhi, December 3: Mahashay Dharampal Gulati passed away at the age of 98 on Thursday morning. He was the owner and CEO of MDH spices. Over the past couple of decades, we have seen the turbaned man promoting the brand MDH on television commercials and on every pack. Over the years, 'MDH uncle' became synonymous with 'Asli Masaale Sach Sach' ads.

Gulati, who was also called Dadaji or Mahashayji, was a fifth-grade school dropout. There are years of his hard work, dedication and perseverance behind the rise of MDH. From a 'tanga wala' to a billionaire, his journey is truly inspiring. Dharampal Gulati Dies: Arvind Kejriwal, Manish Sisodia, Tehseen Poonawalla and Others Condole Demise of MDH Owner.

Dharampal Gulati was born and raised in Pakistan. It was during Partition, his family came to India and they stayed as a refugee in Amritsar.  There are interesting reports about his life journey which say that when he and his brother-in-law left for Delhi, he had bought a horse-drawn carriage (Tanga) with the money his father gave him. He rode the tanga for two months and then he left it because he realised that the business was not doing well.

It was then that he decided to open a small shop and restarted his own family business of selling spices in Karol Bagh. Soon people started recognising his shop and customers started pouring in.  Later, Gulati rented one more shop in Chandni Chowk to begin his factory. This was the starting of Mashian Di Hatti (MDH), his father's legacy. MDH Masala Owner Mahashay Dharampal Gulati Conferred With Padma Bhushan.

The business did not just flourish in India but he became a distributor and exporter as well. As of this day, the spices are exported in various parts of the world, that includes the UK, Europe, UAE, Canda, etc. among others.

In 2018, there were rumours about his death, following that he was happy that so many people are concerned about his health.

We leave you with few ads where Dharampal Gulati appeared:

We at LatestLY pay our condolences to the family members of Dharampal Gulati.

(The above story first appeared on LatestLY on Dec 03, 2020 10:07 AM IST. For more news and updates on politics, world, sports, entertainment and lifestyle, log on to our website latestly.com).