The onset of southwest monsoon over Kerala this year will be around June 1, said the India Meteorological Department (IMD) on Thursday. 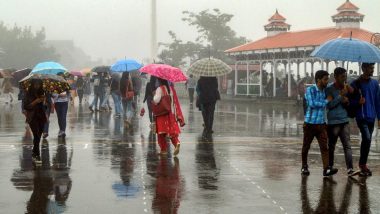 Kochi, May 28: The onset of southwest monsoon over Kerala this year will be around June 1, said the India Meteorological Department (IMD) on Thursday. Forecasting the arrival of the rainy season in India, the IMD said conditions are favourable for the onset of southwest monsoon on June 1. The normal date for monsoon onset over Kerala is June 1. The weather forecast agency has advised fishermen not to venture into the deep-sea fishing till June 4. Monsoon Forecast 2020: Rainfall to Hit Kerala Between June 1 and 5, to Reach Mumbai Between June 15 and 20, Says IMD.

"The monsoon advance will be favourable during May 31 – June 4, due to the likely formation of a low-pressure area over the southeast and east-central Arabian Sea. These conditions are very likely to favour monsoon onset over Kerala from June 1," said the IMD statement. A low-pressure area is likely to form over the southeast Arabian Sea and adjoining areas around May 31. Earlier, the IMD had said that monsoon could hit Kerala by June 5.

Southwest Monsoon has further advanced into some parts of Maldives-Comorin area, some more parts of south Bay of Bengal, remaining parts of Andaman Sea and Andaman & Nicobar Islands. pic.twitter.com/zG4piDDrqk

"This year, the onset of southwest monsoon over Kerala is likely to be slightly delayed as compared to normal date of onset of June 1. Its onset over Kerala this year is likely to be on 5th June with a model error of ± 4 days", the IMD had said in the second week of May. The onset of monsoon was briefly delayed during the last ten days due to cyclonic storm Amphan.

(The above story first appeared on LatestLY on May 28, 2020 03:42 PM IST. For more news and updates on politics, world, sports, entertainment and lifestyle, log on to our website latestly.com).