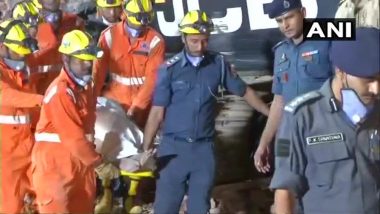 Mumbai, August 27: At least two fatalities were confirmed after portion of a building in south Mumbai collapsed on Thursday. The deceased includes a 70-year-old woman and a 12-year-old girl. Rescue operations are underway to minimise the loss of lives. By the time this report was published, two to three more persons were feared to be trapped under the debris. Raigad Building Collapse Update: After 'Miracle Boy', Woman Survives Mahad Building Crash.

The victims who died were were brought out of the debris shortly after the accident was reported. Their condition was critical due to the injuries. Both of them were rushed to the JJ Hospital where they succumbed to death.

A 12-yr-old girl & a 70-yr-old woman succumbed to their injuries in JJ hospital, after part of a toilet collapsed today in Mishra Building, located at Shuklaji Street in Byculla, Mumbai: Brihanmumbai Municipal Corporation

"A 12-year-old girl and a 70-year-old woman succumbed to their injuries in JJ hospital, after part of a toilet collapsed today in Mishra Building, located at Shuklaji Street in Byculla, Mumbai," said the Brihanmumbai Municipal Corporation (BMC).

The civic body officials confirmed that a dilapidated portion of the building, which included the common toilet, collapsed leading to the fatal incident.

The building collapse in Mumbai was reported barely three days after a five-storey structure in Mahad area of Raigad district had collapsed. The incident led to the death of 16 persons, leaving two children orphaned. The police has booked the building developer, architect and contractor under stringent penal provisions.

(The above story first appeared on LatestLY on Aug 27, 2020 06:34 PM IST. For more news and updates on politics, world, sports, entertainment and lifestyle, log on to our website latestly.com).