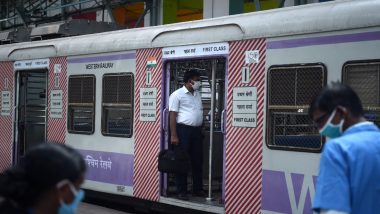 Mumbai, July 13: From July 20, Western Railway has made it mandatory for government employees travelling on local trains to carry QR code passes. The passes can be obtained from their respective offices and they need to show them while entering the station or they will be barred or fined, mid-day reported. Announcement regarding the same is being made at all Western Railway stations. Mumbai Local Trains Resume Services Only For Essential Service Workers, General Public Not Allowed to Board; Check SOPs For Passengers.

According to the report, people travelling on a train can show the passes to ticket checkers/guards on their phone. This step is being taken to monitor the crowd and maintain social distancing norms inside local trains. Mumbai Local Trains Update: CR to Resume Services Between Thane-Vashi For Essential Workers Living on Trans-Harbour Line Route.

"The government and the BMC, in association with the Mumbai police, have been working on preparing QR code passes to be given out to essential services workers. The process of updating the database is in its last stages and it should be completed in a week," an official was quoted as saying by mid-day.

"The QR code passes will be in sync with the ID cards of employees for easier identification," the official said. The railways are also planning on integrating this with existing UTS ticketing system.

(The above story first appeared on LatestLY on Jul 13, 2020 04:01 PM IST. For more news and updates on politics, world, sports, entertainment and lifestyle, log on to our website latestly.com).