"The principal informed Neeraj's mother about the incident and asked to consult an ENT specialist. The examination showed Neeraj's eardrum has ruptured," the officer said. 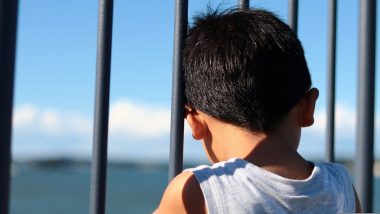 After the incident came to light, the teacher was booked under various sections of the Indian Penal Code and the Juvenile Justice (Care and Protection of Children) Act. The alleged incident took place on September 27 when Tiwari was taking Sanskrit class. Cops said that Tiwari suspected the student identified as Neeraj Yadav (14) of making noise as he was not concentrating on the lecture. Madhya Pradesh Shocker: Priest Assaulted by Indore Family, His Ear Bitten Off on Suspicion of Puja Rituals Going Wrong.

Speaking to the Times of India, an officer from Santacruz police station said, ""We are collecting details and recording statements are in the process. Based on the probe further action will be initiated against the teacher." So far, the police have not arrested the teacher. An FIR regarding the same was filed on September 30.

The incident came to light after the student's mother Poonam (37) filed a police complaint against the teacher. Poonam said that the doctor's report stated that her son suffered a hole in his eardrum after the teacher slapped him. "The teacher mistakenly slapped my son as he had kept his hand on his mouth. My son said other students were talking loudly during the lecture which annoyed the teacher who thought he was talking by keeping his palm on his mouth," she added. Delhi Shocker: Six-Year-Old Boy’s Throat Slit as Part of ‘Human Sacrifice’ Ritual in Lodhi Colony; Two Arrested.

After the matter came to light, the school principal asked two teachers to take Neeraj to the doctor after he complained of pain. Neeraj also said that he was unable to hear as well. "The principal informed Neeraj's mother about the incident and asked to consult an ENT specialist. The examination showed Neeraj's eardrum has ruptured," the officer said.

(The above story first appeared on LatestLY on Oct 03, 2022 12:47 PM IST. For more news and updates on politics, world, sports, entertainment and lifestyle, log on to our website latestly.com).