When asked about the row, Chief Minister Basavaraj Bommai clarified on Thursday that the matter has not been discussed at all in the government levels. "These might be personal views of the Chairperson Shafi Saadi of Karnataka State Board for Wakf," he said. 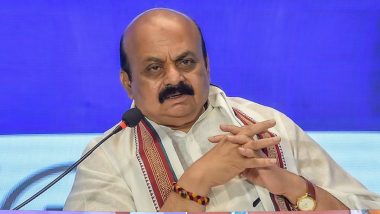 Bengaluru, December 1:  Ruling BJP in Karnataka took a U-turn on Thursday after its decision to build 10 new colleges exclusively for Muslim girls triggered controversy in the state.

When asked about the row, Chief Minister Basavaraj Bommai clarified on Thursday that the matter has not been discussed at all in the government levels. "These might be personal views of the Chairperson Shafi Saadi of Karnataka State Board for Wakf," he said. Karnataka: Controversy Erupts Over State Government’s Decision To Build Colleges for Muslim Girls; Hindu Outfits Warn of Protest.

Hindu organisations had warned state-wide protests and challenged the government that they would not allow the colleges to be built. After Bommai's reaction on the issue, Maulana Shafi Saadi, Chairperson of Wakf Board, stated that he never stated that exclusive colleges for Muslim women would be opened. Karnataka: Three Hindu Activists Detained for Giving Boycott Call Against Muslim Traders in Bengaluru.

"I spoke about opening colleges for women. I had stated that our board has Rs 25 crore fund. We will grant Rs 2.5 crore for each college and they will be started in 10 districts and this matter has been discussed with the minister," he explained. "My full statement is not being published by the media. My statement has been twisted. Wakf board is running 112 education institutions as per the norms of the government," he said.

There is no connection with the hijab crisis and proposed colleges and they will also function as per guidelines. The project is in line with the 'Beti Bachao, Beti Padhao' slogan of Prime Minister Narendra Modi, he maintained. Earlier, the development had created furore in the state. Hindu Jana Jagruthi Samithi leader Mohan Gowda had warned that if colleges for Muslim girls are coming up exclusively, then, Hindu colleges, varsities should also be built.

Sri Rama Sena founder Pramod Muthalik had challenged the ruling BJP that building of exclusive colleges for Muslim girls would not be allowed in Karnataka. State-wide protests would be launched, he added. However, Minister for Muzrai and Wakf, Shashikala Jolle clarified that she had not given any assurance to open exclusive colleges for Muslim girls. Wakf board runs many educational institutions in coordination with organisations.

(The above story first appeared on LatestLY on Dec 01, 2022 02:50 PM IST. For more news and updates on politics, world, sports, entertainment and lifestyle, log on to our website latestly.com).