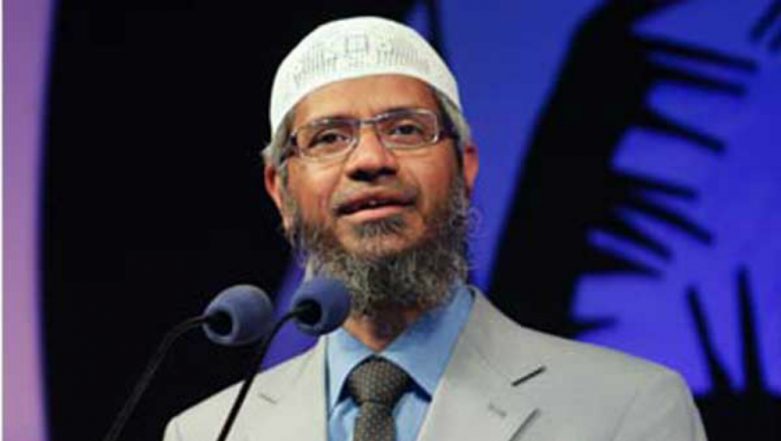 Mumbai, January 19: In another setback for controversial preacher Zakir Naik, who is said to be hiding in Malaysia, the Enforcement Directorate (ED) has attached his assets worth Rs 16.40 crore under the Prevention of Money Laundering Act (PMLA). In a statement on Saturday, the ED said it had issued a provisional order for attachment of assets registered in the name of Zakir Naik’s family members, located in Mumbai and Pune.

"In order to disguise the origin of funds and real ownership of the properties, the initial payments made from Naik’s bank account were refunded and diverted to the accounts of his wife, son and niece and re-routed again for the purpose of making bookings in the name of the family members rather than Naik. This has been revealed from the money trail established by the ED," the central probe agency said. NIA Calls For Public Help to Locate Fugitives, List of 'Most Wanted' Includes Zakir Naik, Hafiz Saeed, Syed Salahuddin.

The properties that are linked to Naik have been identified as Fatima Heights and Aafiyah Heights in Mumbai, an unnamed project in the Bhandup area of Maharashtra’s capital city and a project named Engracia in Pune. Naik is accused of inciting religious enmity through his speeches and hurting religious sentiments. His organisation, the Islamic Research Foundation, and Ms Harmony Media allegedly spread his speeches. Zakir Naik's Follower Arrested from Mumbai on Rape Charges.

The ED had registered a criminal case against Naik and others in December, 2016 after taking cognisance of a National Investigation Agency (NIA) complaint filed under the Unlawful Activities Prevention Act (UAPA). Quoting the NIA charge sheet, the ED said Naik “deliberately and maliciously insulted the religious beliefs of Hindus, Christians and non-Wahabi Muslims, particularly the Shias, Sufis and the Barelwis, with the intention of outraging their religious feelings”.

"For such activities, the accused (Naik) was receiving funds from IRF as well as other unknown sources," the ED claimed. This is the third such attachment by the ED in the case and with the latest order, the total value of assets attached by the agency stands at Rs 50.49 crore.