Former Haryana Chief Minister Om Prakash Chautala has cleared his Class 10 and 12 exams at the age of 87. 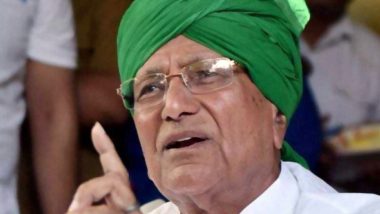 Chandigarh, May 10: Former Haryana Chief Minister Om Prakash Chautala has cleared his Class 10 and 12 exams at the age of 87.

He received his mark sheets from the Haryana board in Chandigarh on Tuesday.

In 2021, Chautala had appeared for Class 12 exams under the Haryana Open Board. However, his result was withheld because he had not yet passed a Class 10 English exam. In order to get his Class 12 result released, he appeared for the Class 10 exam. Haryana Deputy CM Dushyant Chautala Orders Action Against Over 200 Officials for Violation of Rules

He scored 88 marks out of 100 in the English paper in his Class 10 examination last year. Class 10 and Class 12 Board Exam 2021 Passing Percentage Reduced to 23% From Existing 33%? PIB Fact-Check Reveals Truth Behind Fake News

Except English, he had cleared his Class 10 exams from the National Institute of Open School in 2017 while serving a 10-year sentence in Delhi's Tihar Jail in connection with a teachers' recruitment scam.

At an examination centre, Chautala had refused to speak to the media, saying "I am a student."

(The above story first appeared on LatestLY on May 11, 2022 11:36 AM IST. For more news and updates on politics, world, sports, entertainment and lifestyle, log on to our website latestly.com).