India today successfully carried out two tests of Pinaka guided extended range rockets off the coast of Balasore in Odisha. Both the rockets hit their targets at 90-km range. 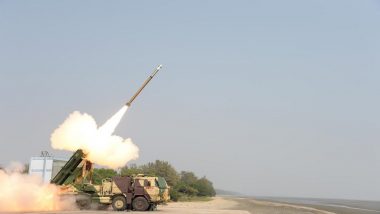 New Delhi, March 11: The Defence Research and Defence Organisation (DRDO) on Monday successfully test-fired the Pinaka guided extended range rockets in Rajasthan's Pokhran. The two rockets, which were tested using the guided Pinaka system, succeeded in hitting the 90-km mark. The success signals a boost in the efficiency of Pinaka system, as the rockets had touched the 70-km mark in their last trials, held in May, 2018.

"Telemetry Systems tracked and monitored the vehicle all through the flight path. All the mission objectives have been met. The indigenously developed Guided Pinaka by DRDO will significantly boost the capability of the artillery to make precision hits," it further adds.

The successful trial of the guided Pinaka has reinforced the technological strength of the country in converting the unguided systems into weapons of high precision and accuracy, he said.

The weapon system was most prominently used during the 1999 Kargil War, when the Indian forces had accurately targeted the Pakistani posts stationed at mountain posts.

(The above story first appeared on LatestLY on Mar 11, 2019 06:51 PM IST. For more news and updates on politics, world, sports, entertainment and lifestyle, log on to our website latestly.com).