In a big decision to bring about more social and economic inclusivity, the Government of India has decided to continue Pradhan Mantri Awas Yojana-Urban (PMAY-U) up to 31st December 2024. This gigantic decision is intended to incorporate all those who need it. 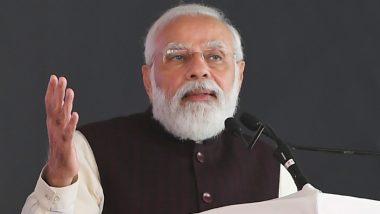 In a big decision to bring about more social and economic inclusivity, the Government of India has decided to continue Pradhan Mantri Awas Yojana-Urban (PMAY-U) up to 31st December 2024. This gigantic decision is intended to incorporate all those who need it. The continuation of the scheme based on the request of states/UTs, will also help in completion of already sanctioned houses under BLC, AHP & ISSR verticals.

Presently, financial assistance is being provided for the construction of 122.69 lakh sanctioned houses under the scheme. The union cabinet, chaired by Prime Minister Narendra Modi, approved the Ministry of Housing and Urban Affairs proposal for continuation of PMAY-U up to 31st December 2024. Union Budget 2022-23: Extend Benefit of PMAY, CLSS to Encourage Housing Consumption, Says Former President PHDCCI Rajeev Talwar.

Launched on 25th June 2015, Pradhan Mantri Awas Yojana (Urban) mission intends to provide housing for all in urban areas by year 2022. The Mission provides central assistance to the implementing agencies through states and union territories (UTs) and Central Nodal Agencies (CNAs) for providing houses to all eligible families or beneficiaries against the validated demand for houses for about 1.12 crore.

As per PMAY(U) guidelines, the size of a house for Economically Weaker Section (EWS) could be upto 30 sqare metre carpet area, however states and UTs have the flexibility to enhance the size of houses in consultation and approval of the ministry.

In continuation to this government’s efforts towards empowerment of women from EWS and LIG unlike earlier schemes, PMAY (U) has made a mandatory provision for the female head of the family to be the owner or co-owner of the house under this Mission.

Under the verticals of PMAY (Urban), a basket of options is adopted to ensure inclusion of a greater number of people depending on their income, finance and availability of land through following four options.

Housing for All scheme provides all weather pucca houses to all eligible beneficiaries in the urban areas covering the entire urban area of the country, for example- all statutory towns as per Census 2011 and towns notified subsequently, including notified planning/development areas.

During the period of 2004-2014, 8.04 lakh houses were completed under Urban Housing Scheme. Under the Modi Government, the issue of providing houses to all eligible urban dwellers in saturation mode was brought into focus and the scheme of PMAY-Urban was conceptualised.

Out of the total sanctioned 123 lakh houses, the proposals of 40 lakh houses were received late during last 2 years of scheme from the states/UTs which require another two years to complete them. Therefore, based on the requests from the states/UTs, the Central Government decided to extend the implementation period of PMAY-U till 31.12.2024.

In line with the Prime Minister’s vision of ‘Housing for All’, with a total investment of Rs 8.31 lakh crore, PMAY-U has so far sanctioned 122.69 lakh, out of which more than 1 crore houses have been grounded and over 61 lakh houses have been completed and delivered to the beneficiaries. Owing to the construction work under PMAY-U, 423 lakh MT cement and 96 lakh MT steel has been consumed while 239 Lakh jobs have been created.

Over the years, various technological and reformative measures have been taken by the concerned ministry to transform the urban landscape of India. Six Light House Projects (LHPs) under Global Housing Technology Challenge India (GHTC-India) is one such initiative that is promoting globally available construction technologies that are sustainable, eco-friendly and disaster-resilient to enable a paradigm shift in affordable housing.

The LHPs showcase the best of new-age alternate global technology in the housing construction sector. The project in Chennai has been completed in all respects and was inaugurated by Prime Minister on 26th May 2022. LHPs in Rajkot, Indore, Lucknow, Ranchi and Agartala are currently in the making.

MoHUA has also launched Affordable Rental Housing Complexes (ARHCs), a sub-scheme under PMAY-U for urban migrants/poor. Under Model 1, a total of 5,478 existing government-funded vacant houses have been converted into ARHCs in Chandigarh, Gujarat (Ahmedabad, Rajkot and Surat), Rajasthan (Chittorgarh) and Jammu.

Proposals for converting 7,483 vacant houses into ARHCs have been processed in Gujarat, Himachal Pradesh, Haryana, Madhya Pradesh, Uttarakhand and Rajasthan. Under Model 2, 80,273 new ARHC units with TIG of Rs 178.28 crore have been sanctioned for construction by public/private entities. Meanwhile, the construction of 22,689 new ARHC units is in progress in Sriperumbudur, Tamil Nadu.

(The above story first appeared on LatestLY on Aug 11, 2022 12:20 PM IST. For more news and updates on politics, world, sports, entertainment and lifestyle, log on to our website latestly.com).