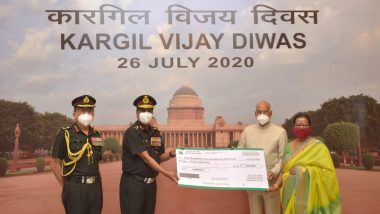 New Delhi, July 26: As a tribute to soldiers who fought in the Kargil war, President Ram Nath Kovind on Sunday donated Rs 20 lakh to the Army hospital here to buy equipment that will help doctors and paramedics combat COVID-19 effectively.

The contribution from the president will be used to procure units of PAPR (powered air purifying respirator), which are state-of-the-art equipment to enable medical professionals breathe during surgeries and protect them from infection, an official communique said. Kargil Vijay Diwas 2020: PM Narendra Modi Remembers Courage and Determination of Armed Forces, Says Their Valour Continues to Inspire Generations.

As a tribute to soldiers who fought valiantly and made supreme sacrifice in the Kargil war, President Kovind presented a cheque of Rs 20 lakh to the Army Hospital (R&R), Delhi, to buy equipment that will help doctors and paramedics to combat the Covid-19 pandemic effectively. pic.twitter.com/vdj5fPvrUa

This will serve the larger cause of patients' care and protection to those warriors who are fighting an invisible enemy, it said. "As a tribute to soldiers who fought valiantly and made supreme sacrifice in the Kargil war, the President of India, Ram Nath Kovind, today presented a cheque of Rs 20 lakh to the Army Hospital (Research and Referral), Delhi, to buy equipment that will help doctors and paramedics to combat the COVID-19 pandemic effectively," the statement said.

Sunday was the 21st anniversary of India's victory over Pakistan in the Kargil war. The day is observed as 'Kargil Vijay Diwas'. The president's contribution to the Army hospital has been made possible due to an exercise to economise expenditure at the Rashtrapati Bhavan, the communique said.

The president had earlier issued directions to reduce expenses by initiating a slew of measures. "As a sequel to this initiative, he had earlier deferred the proposal to buy a limousine which was to be used for ceremonial occasions," the statement issued by the Rashtrapati Bhavan said.

In his role as the supreme commander of the armed forces, the president's gesture will boost the morale of the frontline COVID warriors of the Army hospital, it said.

"It will go a long way in providing a safe, conducive environment to them so that they can perform to the best of their ability. It is also hoped that the gesture will inspire other people and organisations to economise expenditure and utilise the savings to aid and support our COVID warriors," the statement said.

The Army Hospital (Research and Referral) is the apex medical care centre for the armed forces of India. Officiating commandant Major General Sarat Chandra Dash was also a participant in "OP VIJAY" for which he was awarded the Yudh Seva Medal, it said.

On July 26, 1999, the Indian Army had announced the successful culmination of "Operation Vijay", declaring victory over Pakistan after the nearly three-month-long battles in the icy heights of Kargil. The country lost more than 500 soldiers in the war.

"In the prevailing situation, its doctors, nurses and paramedical staff are tirelessly working round the clock and providing the highest quality of medical care at great risk to their own lives," the Rashtrapati Bhavan said.