The child stumbled into the borewell that was covered with cement bags at around 4 p.m., his mother said. 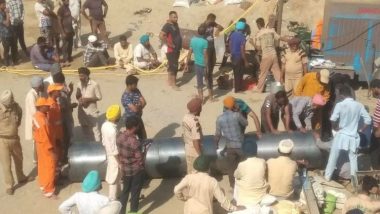 Chandigarh, June 9: Rescuers of the National Disaster Response Force (NDRF) on Sunday evening said they were close to reaching a two-year-old boy who has been trapped in a 150-foot-deep abandoned borewell for over 76 hours in a village in Punjab's Sangrur district. Punjab: Two-Year-Old Fatehveer Singh Falls Into 150-ft Deep Borewell in Sangrur, Rescue Operations Continue From Last 76 Hours.

The operation resumed in the morning after a delay of five hours due to a technical snag to recover the boy who fell into the narrow and deep borewell on the evening of June 6. Special teams have worked day and night in a tunnel that was dug parallel to the borewell.

The digging was almost over in the newly-laid 36-inch-diameter parallel shaft to reach the child who is believed to be stuck at a depth of 110 feet in the borewell that has a nine-inch diameter.

A team of doctors and ambulances have been stationed at the spot. A movement in the child's body was noticed at 5 a.m. on Saturday, almost 40 hours after the incident. After that there was no movement in his body.

Just in ; Cc tv footage of 2 year old #FatehveerSingh is still trapped inside 150-ft deep borewell in #Bhagwanpura #Sangrur #Punjab. For last about 30 hours Rescue operations are on to pull-out him from Borewell. @capt_amarinder pic.twitter.com/AuDppDdKmi

The parallel tunnel was dug manually to reach the child, Fatehveer Singh, who is turning two on June 10, a rescuer told IANS on phone. After digging the parallel tunnel, a passage to create access to the child is being made through another horizontal tunnel, he said.

Adequate supply of oxygen inside the well is being provided and a camera is being used to monitor the child's condition. A special NDRF team that has experts in rescuing people trapped in wells has been deployed, Deputy Commissioner Ghanshyam Thori told reporters.

He said the child's hands were clamped within seven-eight hours of the incident so he could not have slipped further. The child stumbled into the borewell that was covered with cement bags at around 4 p.m., his mother said.

The rescue team, comprising 26 members of the NDRF and the Indian Army with district administration staff, has been involved in the day-and-night operation at Bhagwanpura in Sunam subdivision, some 15 kms from district headquarters at Sangrur.

Followers of Sirsa-based Dera Sacha Sauda were also involved in the rescue operation. An attempt was made earlier to pull out the child with the help of a rope. He has been tied with a rope to prevent him from slipping down, a rescuer said. The NDRF said this is one of the most complex rescue operations undertaken in the country. Pune: 6-Year-Old Boy Trapped in Borewell Rescued After 16-Hour Operation

The borewell had been abandoned for over seven years. This was the second such incident in the area in less than three months. Thousands of people have been sending messages to TV channels, wishing luck to the rescuers. On March 22, a one-and-a-half-year-old boy, who fell into a 70-foot narrow borewell in Haryana's Hisar district, was rescued after a 48-hour operation. In July 2006, Army engineers in Haryana's Kurukshetra town had rescued a little boy trapped in a 60-foot well for two days.

(The above story first appeared on LatestLY on Jun 09, 2019 10:33 PM IST. For more news and updates on politics, world, sports, entertainment and lifestyle, log on to our website latestly.com).