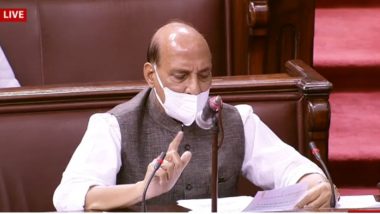 New Delhi, September 17: Defence Minister Rajnath Singh made a statement on India-China border issue, in Rajya Sabha on Thursday. He spoke about how 'Chinese actions reflect disregard of our various bilateral agreements'. China continues to be in illegal occupation of approx 38,000 sq. kms in the Union Territory of Ladakh.

Elaborating further he said that the situation this year is very different both in terms of the scale of troops involved and the number of friction points. "We do remain committed to a peaceful resolution of the current situation. At the same time, we remain prepared to deal with all contingencies," said Singh in Rajya Sabha today.

The situation this year is very different both in terms of scale of troops involved & no. of friction points. We do remain committed to peaceful resolution of the current situation. At the same time, we remain prepared to deal with all contingencies: Rajnath Singh in Rajya Sabha pic.twitter.com/BmgGx1rp6n

Praising the soldiers, he mentioned that the conduct of the armed forces throughout these incidents show that not only have they maintained  'Sayyam' in face of provocative actions, but they have also equally displayed 'Shaurya' when required to protect the territorial integrity of India.

Rajnath Singh mentioned, "On June 15, Col Santosh Babu, along with his 19 brave soldiers, made the supreme sacrifice in Galwan Valley towards the cause of defending the territorial integrity of India. Our PM himself went to Ladakh to boost the morale of forces."

On Tuesday, Singh addressed the Lok Sabha on the matter and assured the nation that the Indian armed forces are capable of guarding the frontiers along the glacial heights in Ladakh. On Tuesday, lawmakers of Congress staged a walkout from the Lok Sabha following Singh's statement on the India-China face-off. The party MPs were aggrieved over no immediate discussion being permitted in the House over Singh's address on the raging border issue.

(The above story first appeared on LatestLY on Sep 17, 2020 12:55 PM IST. For more news and updates on politics, world, sports, entertainment and lifestyle, log on to our website latestly.com).