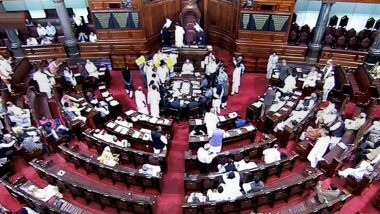 New Delhi, June 1: The polls for 24 seats of the Rajya Sabha will be held on June 19, announced the Election Commission on Monday. The Upper House elections were earlier slated for March, but the outbreak of coronavirus led to the postponement. The social distancing and containment zone norms - which are part of the government's "Unlock 1" guidelines - would be adhered to, the polling body said. Maharashtra CM Uddhav Thackeray, 8 Others Elected Unopposed to Legislative Council.

"Elections to Council of States (Rajya Sabha) to fill 24 seats from States of Andhra Pradesh, Gujarat, Jharkhand, Madhya Pradesh, Manipur, Meghalaya, Arunachal Pradesh, Karnataka, Mizoram and Rajasthan to be held on 19th June, 2020," the Election Commission said in a statement.

As per the scheduled released by the EC, voting will begin at 9:00 am on June 19 for the 18 seats of Rajya Sabha that are slated for contest. The polling will conclude at 4:00 pm. The counting of votes would begin at 5:00 pm and the results are expected to be announced on the same day.

The entire process of elections is scheduled to be over by June 22. The Commission has tasked the Chief Secretaries of polling states to depute officers for the electioneering purpose. The top bureaucrats must depute officers after taking into consideration the policy on containment zones, the EC said.

For the Rajya Sabha polls, voting is held indirectly through legislators. In other words, the representatives are not elected by the common voters, but by the Members of Legislative Assemblies who were directly voted from their respective constituencies by the electorate.

Election Commission of India announces schedule for Biennial Elections to the Council of States (Rajya Sabha) to fill 6 seats from 3 States.

The Rajya Sabha elections feature the nomination of top politicians including former Union Minister Jyotiraditya Scindia. Once a senior Congress leader and close aide of ex-party chief Rahul Gandhi, Scindia jumped ship to the Bharatiya Janata Party (BJP) as part of his bid to bring down the Kamal Nath-led Madhya Pradesh government.

(The above story first appeared on LatestLY on Jun 01, 2020 05:51 PM IST. For more news and updates on politics, world, sports, entertainment and lifestyle, log on to our website latestly.com).