The Election Commission informed on Thursday that Elections to 57 Rajya Sabha seats spread across 15 states will take place on June 10. 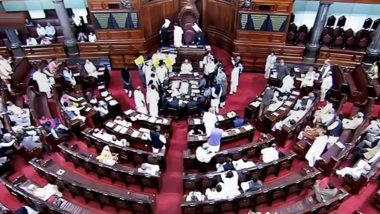 The Election Commission informed on Thursday that Elections to 57 Rajya Sabha seats spread across 15 states will take place on June 10.

The term of office of 57 members of the Council of States elected from 15 states is due to expire on their retirement between June-August 2022. The counting of votes will take place on the same day.  Rajiv Kumar To Take Charge As New CEC on May 15; Will Oversee 2024 Lok Sabha Elections and Various State Polls

Seats from Karnataka and Maharashtra vacated by Nirmala Sitharaman (BJP) and P Chidambaram (Congress) will also go for polls. The EC announced the Rajya Sabha election schedule on Thursday, May 12:

May 24: Notification will be issued

May 31: Last date of making nominations

The Election Commission also directed the Chief Secretaries concerned to depute a senior officer from the State to ensure that necessary Covid-19 containment measures are complied with while making arrangements for the conduct of the elections. Centre to Table Bill in Rajya Sabha to Prohibit Financing of Weapons of Mass Destruction

The maximum number of seats fall in Uttar Pradesh i.e 11, and followed by Maharashtra and Tamil Nadu with 6 seats each.

(The above story first appeared on LatestLY on May 12, 2022 05:01 PM IST. For more news and updates on politics, world, sports, entertainment and lifestyle, log on to our website latestly.com).