Rajiv Kumar To Take Charge As New CEC on May 15; Will Oversee 2024 Lok Sabha Elections and Various State Polls

Kumar was the chairperson of the Public Enterprises Selection Board (PESB) when he was appointed an election commissioner. 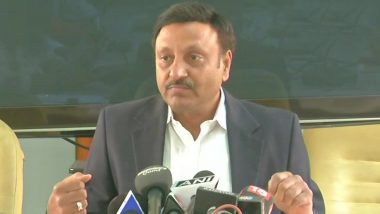 New Delhi, May 12: Election Commissioner Rajiv Kumar was on Thursday appointed as the next chief election commissioner. He will assume charge on May 15 after incumbent Sushil Chandra demits office on May 14, a notification issued by the law ministry said.

"In pursuance of clause (2) of article 324 of the Constitution, the President is pleased to appoint Shri Rajiv Kumar as the Chief Election Commissioner with effect from the 15th May, 2022," read the notification.

Once Chandra demits office, there will be a vacancy in the poll panel.

Born in 1960, Kumar will demit office sometime in middle of February 2025.

Besides the President and the Vice President elections due shortly, the 2024 Lok Sabha polls and several assembly polls will be held under his watch.

Kumar was the chairperson of the Public Enterprises Selection Board (PESB) when he was appointed an election commissioner.

A 1984-batch Indian Administrative Service officer of the Bihar/Jharkhand cadre, Kumar superannuated from service in February 2020.