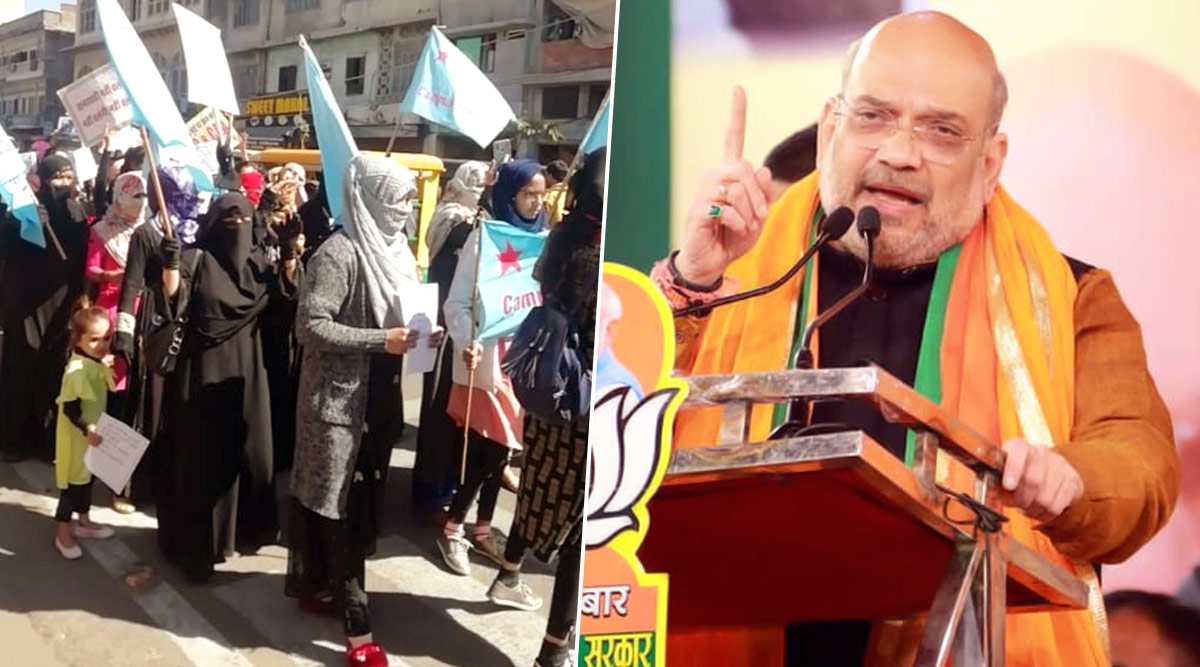 New Delhi, February 16: Protesters from Delhi' Shaheen Bagh on Sunday afternoon began their march to Union Home Minister Amit Shah's residence to discuss the Citizenship Amendment Act (CAA) and the National Register of Citizens (NRC). However, it is learnt that the Shaheen Bagh protesters were not given appointment from Amit Shah. Shah's residence at Krishna Menon Marg was completely barricaded from all sides. 'NRC Will Happen', BJP Quotes Amit Shah Saying During Media Seminar, Later Deletes Tweet.

According to reports, protesters from Shaheen Bagh sought permission to take out a march till Shah's residence. However, the Delhi Police did not grant them permission. "They (Shaheen Bagh protesters) told us that they wanted to take out a march (to meet Amit Shah) but we told them they cannot as they do not have appointment call from Union Home Minister," RP Meena, DCP South East, told news agency ANI. Why Citizenship Amendment Act+NRC Raise Fear And Concerns: A Multi-Dimensional Take.

On Saturday, a section of Shaheen Bagh protesters said that they wanted to meet Shah to raise their concerns over the CAA but added that the onus was on the government to call them for talks. They said the protest was "leaderless" and it was up to the Home Minister to decide who all he wanted to call for talks. Later, the Ministry of Home Affairs, in a statement said that no meeting has been scheduled with Shah on Sunday.

In an interaction with a news channel earlier this week, Shah said anyone who wants to discuss issues related to CAA with him can seek time from his office. "(We) will give time within three days," the Home Minister added. The protesters at Shaheen Bagh, mainly women, have been staging a sit-in demonstration for the past two months against the Citizenship Amendment Act (CAA), National Register of Citizens (NRC) and National Population Register (NPR).

According to the CAA, members of Hindu, Sikh, Buddhist, Jain, Parsi and Christian communities who have come from Pakistan, Bangladesh and Afghanistan till December 31, 2014, and facing religious persecution there will not be treated as illegal immigrants but will be given Indian citizenship. The law excludes Muslims.