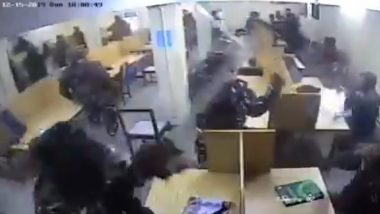 New Delhi, February 16: A video, claimed to be shot on the night of December 15, emerged on social media showing Delhi Police brutally assaulting a group of "students" inside the Jamia Millia Islamia library. While the police department was yet to issue a clarification, some of the netizens claimed that those being cracked down by the police - as seen in the clip - are not students but "protesters". Jamia Violence: Delhi HC Issues Notice to Centre on Plea of Student, Who Lost Eye, Seeking Probe.

In the minute-long footage, personnel of the riot control squad of Delhi Police could be seen entering inside the Jamia library and launching a lathi charge against those sitting inside. A majority of those who have shared the video have called it a "brutal assault" on the unarmed students of the varsity. However, some netizens have also pointed out that among those who were being assaulted by the police included men with handkerchiefs on their face.

'Why Students Are Using Handkerchief to Hide Faces'

Why these Jamia students having handkerchief to cover their face...?

It look like they did something wrong and came to library for hiding themselves.

More Among Twitterati Question the Use of Handkerchief

Well Played... but it will not work @anuragkashyap72 https://t.co/x1UOyRwVpO pic.twitter.com/7osYR7C8qy

Even as a section for internet users raised hue over handkerchief being used by a "student" inside the closed environs of library, others expressed outrage over the use of brute force by the police against them. Senior Congress leader Priyanka Gandhi Vadra slammed the Delhi Police and Union Home Minister Amit Shah, accusing them of "lying" to the nation that the police personnel had not entered inside the library.

The violence inside the Jamia campus was reported on December 15 last year, when the students had organised a march against the Citizenship Amendment Act (CAA) outside the varsity. After clashes erupted with the police personnel, a section of the protesters reportedly rushed back towards the campus. The police force allegedly chased them inside the varsity and launched a "violent crackdown". The female protesters have accused the police personnel of hitting them on their "private parts".

(The above story first appeared on LatestLY on Feb 16, 2020 10:51 AM IST. For more news and updates on politics, world, sports, entertainment and lifestyle, log on to our website latestly.com).