The robber managed to escape with six sovereign gold jewelry and Rs 10,000. The report informs that the man gained entry into the house claiming to be their father’s associate from whom their father had borrowed Rs 10,000. 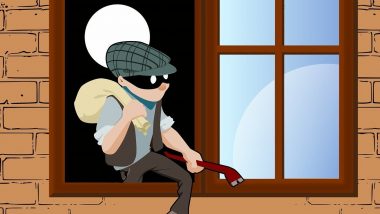 Chennai, September 27: An incident of robbery has been reported from Tamil Nadu's Avadi where an unidentified man tricked two kids by posing as their father's friend. Reports inform that the incident took place when the children were alone at home in Avadi. According to a report by TOI, the robber escaped with six sovereign gold jewelry and Rs 10,000 on Saturday. The report informs that the man gained entry into the house claiming to be their father’s associate from whom their father had borrowed Rs 10,000.

The TOI report states that Bharath Raj, 12 and Kesavan, 10, sons of a 42-year-old man named Narayanan were tricked by the thief.  The man worked as a tailor while his wife Thamzhil Selvi was employed at a private firm. The kids were usually left at home during the day. Karnataka: Robber Files Complaint Against Crowd for 'Attacking and Beating' Him in Bengaluru.

The man approached the children told them that their father had asked him to take the money kept in the almirah. He tried to convince them by saying that their father owes him the money as he had to repay him the lent money. Before the kids could alert their father, the man took the keys from them and took out Rs 10,000 and six sovereign gold jewellery from the cupboard.

Soon after, the children informed one of their neighbours, who later informed their father. Based on a complaint from Narayanan, police launched a hunt for the miscreant.

(The above story first appeared on LatestLY on Sep 27, 2021 04:33 PM IST. For more news and updates on politics, world, sports, entertainment and lifestyle, log on to our website latestly.com).