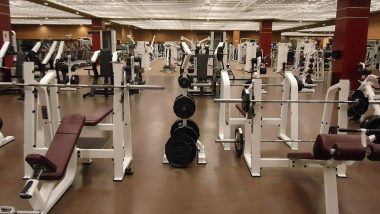 Chandigarh, July 31: The Punjab government on Friday issued the Unlock 3 guidelines, which would come into effect for the month of August. In accordance to the guideline issued by the Centre earlier this week, Punjab has decided to allow the re-opening of gyms, fitness and yoga centres. Unlock 3: Delhi L-G Anil Baijal Cancels CM Arvind Kejriwal's Decision to Open Hotels, Weekly Markets.

A statement issued by the Chief Minister's Office (CMO) confirmed that the gymnasiums and yoga centres will resume operations from Wednesday, August 5. However, social distancing norms including wearing of face masks need to be strictly adhered to.

Gyms and other fitness institutions were closed down across the country in March, after the outbreak of coronavirus. Since most gyms are built in closed premises and use air-conditioners, experts had earlier warned against their reopening as it may lead to transmission of the virus.

Punjab Government issues #Unlock3 guidelines, mandates night curfew from 11pm to 5am in the state; gyms and yoga institutes to open on 5th August

The Amarinder Singh government also decided to reduce the night curfew hours in the state. Instead of 9 pm, the curfew would now come into effect from at 11 pm. The restrictions would be eased at the same time, at 5 am in the morning.

Punjab, as per the last update issued on Thursday, has reported a total of 15,456 COVID-19 cases. The numbers include over 10,000 recoveries and 4,577 active infections. Death toll due to the pandemic stands at 370 in the state.

(The above story first appeared on LatestLY on Jul 31, 2020 05:59 PM IST. For more news and updates on politics, world, sports, entertainment and lifestyle, log on to our website latestly.com).