Uttar Pradesh: 5 Dead, Over 30 Injured After Bus Rams Into Tractor Trolley on Agra-Lucknow Expressway in Unnao 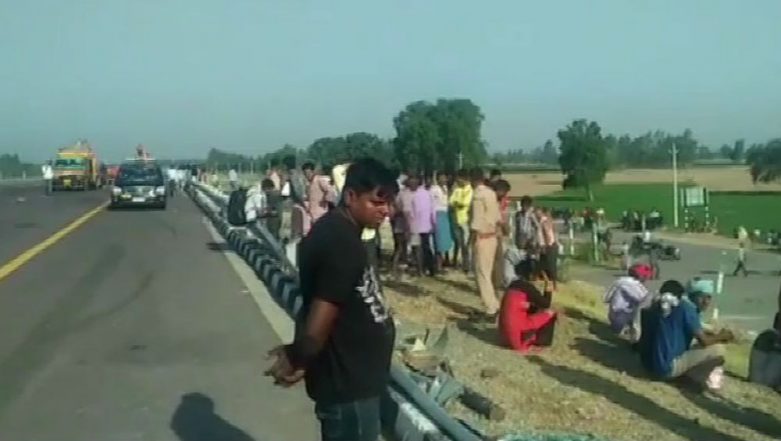 Unnao, May 18: At least five people have been killed and scores have been badly injured in a road accident in Unnao region of Uttar Pradesh on Saturday. According to a tweet by ANI, apart from the 5 people who lost their lives, over 30 people have been injured. The tragic incident took place after a bus rammed into a tractor trolley on Lucknow-Agra expressway during the early hours on Saturday. Uttar Pradesh: 7 Dead, 34 Injured After Bus Rams Into Truck on Agra-Lucknow Expressway.

Many road accidents have been reported from the Lucknow-Agra expressway in the last few months. In April, eight people were killed on the Agra-Lucknow Expressway. Reports inform that the deadly accident took place after an Ertiga car rammed into a truck which was parked at the side of the road in Fatehabad locality. While 6 of the 8 were killed on the spot, 2 succumbed to their injuries in the hospital. Lucknow-Agra Expressway: Fresh Toll Imposed on Commuters, But Tea Will be Offered as Goodwill.

Unnao: 5 dead, more than 30 injured after a bus rammed into a tractor trolley on Lucknow-Agra expressway pic.twitter.com/hVznRr2XlM

Earlier in April, two people were killed in the accident after a truck, carrying rice sacks, caught fire on the Expressway. Reports inform that the truck was engulfed in fire after its diesel tank burst.