The petition was filed in December 2019 on behalf of Swayambhu Jyotirlinga Bhagwan Vishweshwar in the court of civil judge. The petitioner claimed that Mughal Emperor Aurangzeb, in 1664, had pulled down a portion of the 2000-year-old Kashi Vishwanath temple to build the mosque in its place. 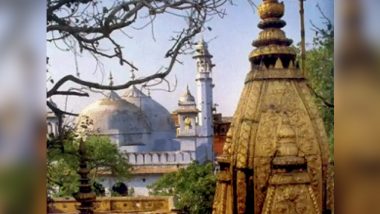 Varanasi, April 8: A Varanasi court has ordered an archaeological survey of the Kashi Vishwanath Temple-Gyanvapi mosque site. The court, on Thursday, gave its approval for survey of Kashi Vishwanath temple and Gyanvapi Mosque complex by Archaeological Survey of India (ASI). The court further directed the Uttar Pradesh government to bear the cost of the survey. The ASI is likely to set up a five-member team that will visit the campus soon.

The court order came on a petition filed by a local lawyer Vijay Shankar Rastogi, who had demanded that the land entailing the Gyanvapi Mosque be restored to Hindus.

The petition was filed in December 2019 on behalf of Swayambhu Jyotirlinga Bhagwan Vishweshwar in the court of civil judge. The petitioner claimed that Mughal Emperor Aurangzeb, in 1664, had pulled down a portion of the 2000-year-old Kashi Vishwanath temple to build the mosque in its place.

The petitioner had further contended that the Kashi Vishwanath temple was built by Maharaja Vikramaditya about 2,050 years ago, but Mughal emperor Aurangzeb destroyed the temple in 1664 and used its remains to construct a mosque, which is known as Gyanvapi masjid, on a portion of the temple land.

The petitioner requested the court to issue directions for the removal of the mosque from the temple land and give back its possession to the temple trust. The first petition was filed in the Varanasi civil court in 1991 on behalf of Swayambhu Jyotirlinga Bhagwan Vishweshwar seeking permission for worship in Gyanvapi.

The petition contended that the Places of Worship (Special Provisions) Act was not applicable to the suit as the mosque was constructed over a partly demolished temple and many parts of the temple exist even today.

In 1998, Anjuman Intezamia Masjid Committee moved the High Court contending that the mandir-masjid dispute could not be adjudicated by a civil court as it was barred by the law. The High Court stayed the proceedings in the lower court which had continued for the past 22 years.

In February 2020, the petitioners approached the lower court again with a plea to resume the hearing as the High Court had not extended the stay in the past six months.

(The above story first appeared on LatestLY on Apr 08, 2021 08:48 PM IST. For more news and updates on politics, world, sports, entertainment and lifestyle, log on to our website latestly.com).