In its all India weather bulletin. the IMD said that scattered to widespread rainfall and snowfall very likely over Jammu, Kashmir, Ladakh during the next four days. 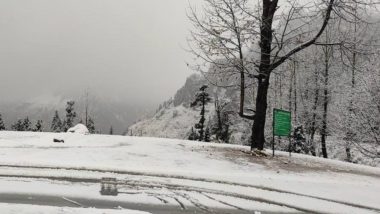 New Delhi, February 24: Several states in North India are expected to receive widespread rainfall and snowfall this week, the India Meteorological Department (IMD) said. In its all India weather bulletin. the IMD said that scattered to widespread rainfall and snowfall very likely over Jammu, Kashmir, Ladakh during the next four days. Moreover, hill states--Himachal Pradesh and Uttarakhand will also have to brace for cold weather conditions till February 28. The IMD has predicted rainfall and snowfall over Himachal Pradesh for the next five days and over Uttarakhand during February 26-28, 2021. La Nina in India: Country to Witness More Cyclones, Relatively Colder Winter This Year, Says IMD.

The IMD said that isolated thunderstorms and lighting was very likely over these regions during the entire week. "Over Himachal Pradesh and Uttarakhand, thunderstorms during February 26 and 27, 2021. Isolated Hailstorm also very likely over Jammu, Kashmir, Ladakh, Gilgit, Baltistan & Muzaffarabad on 25th and over Himachal Pradesh & Uttarakhand on February 26, 2021", the IMD said.

The IMD said that the current weather conditions under the influence of the Western Disturbance as a trough in mid & upper tropospheric levels with its axis at 5.8 km above mean sea level roughly along longitude 62°E to the north of latitude 32°N.

(The above story first appeared on LatestLY on Feb 24, 2021 04:43 PM IST. For more news and updates on politics, world, sports, entertainment and lifestyle, log on to our website latestly.com).