According to the government spokesman, the chief minister plans to launch many beneficial schemes through the Department of Fisheries, which will not only promote fisheries business but will also provide jobs to the needy that will help them become self-reliant once again. 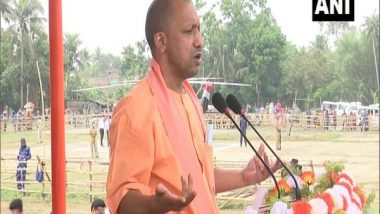 Lucknow, April 11: The Yogi Adityanath government in Uttar Pradesh is planning to provide employment opportunities to the youth in fish farming.

The state government sees considerable employment potential in this sector and believes that it can play an important role in rural development and the economy. This easy-to-start business can be started with low capital.

According to the government spokesman, the chief minister plans to launch many beneficial schemes through the Department of Fisheries, which will not only promote fisheries business but will also provide jobs to the needy that will help them become self-reliant once again. This will also help in increasing the income of the village panchayat from the ponds built on the barren Panchayati land in the village. COVID-19 Surge in Uttar Pradesh: Yogi Adityanath Govt Allows Only 5 Persons at a Time in Religious Places.

"Along with imparting training on fisheries, efforts are being made by the government to expand this business on a larger scale. Now farmers can increase their income by farming as well as fisheries," the spokesman said.

It may be recalled that the state government has already increased the duration of fishery reservoirs from 3 years to 10 years. This is the reason that the state has produced 26.44 lakh MT of fish during the last four years. As many as 1,191.27 crore fishery seeds were produced in four years and 5,902 fish farmers were provided Kisan Credit Cards.

The state government has also provided the benefit of free fishermen accident insurance scheme to the farmers by implementing the 'Pradhan Mantri Matsya Sampada Yojana' under the Atmanirbhar campaign. Tika Utsav: 6,000 COVID-19 Vaccination Centres in UP, Yogi Adityanath Urges People to Get Vaccinated.

The state government has also allotted 2,215 fishermen, houses in the state in the last four years. Along with this, the facilities for fishermen of Uttar Pradesh are now available through the fish farmer app.

Farmers are directly being benefitted from the construction of 57 fish seed hatcheries and 385 fish seed rearing units in the state. Recently, Uttar Pradesh has also received the first prize of the best state of inland fisheries under the leadership of the chief minister Yogi Adityanath.

(The above story first appeared on LatestLY on Apr 11, 2021 04:59 PM IST. For more news and updates on politics, world, sports, entertainment and lifestyle, log on to our website latestly.com).