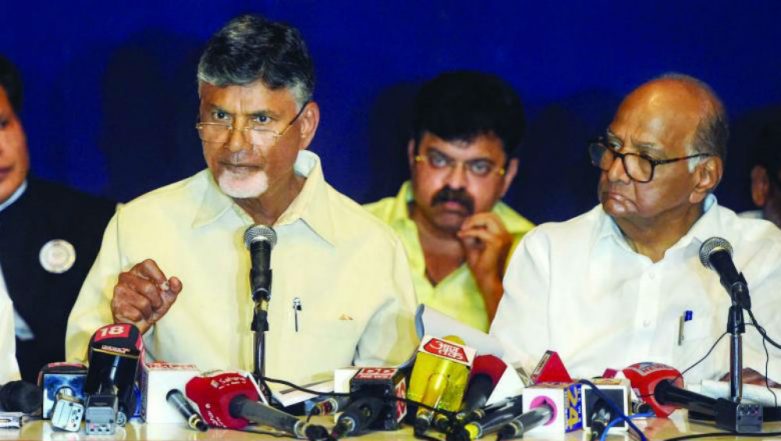 Amravati, May 20: Keeping up his tirade against Prime Minister Narendra Modi and the Bharatiya Janata Party (BJP) over alleged allegations of poll rigging and malpractice, Andhra Pradesh Chief Minister N Chandrababu Naidu along with 21 Opposition party leaders will meet the Election Commission (EC) on Tuesday at 3 PM. Chandrababu Naidu Meets West Bengal CM Mamata Banerjee, Continues His Efforts for Non-BJP Coalition Even After Exit Poll Predicts Over 300 Seats for NDA.

The Andhra CM and the Opposition parties will press their demand of tallying VVPAT slips with EVM figures in an entire Assembly constituency, in case a discrepancy is found in any polling booth, reported news agency ANI.

On May 18, Naidu urged the Election Commission to count votes through Voter-Verified Paper Audit Trail (VVPAT) instead of EVMs during counting for the Lok Sabha polls.On May 7, the Supreme Court turned down a review plea by 21 opposition parties seeking a direction to increase random physical verification of VVPAT from five to at least 50 per cent of EVMs.

The review petition was filed after the Supreme Court on April 8 directed the ECI to increase physical counting of VVPAT slips to 5 random EVMs in each constituency. Earlier, only VVPAT slips from one EVM in every Assembly segment or constituency was subjected to physical verification.

Earlier in the day, CM Naidu met West Bengal Chief Minister Mamata Banerjee and said that he is not dissuaded by the exit polls results. "Exit polls have proved to be incorrect and far from ground reality in many instances," Naidu tweeted on Sunday. (With ANI Inputs)