Rajasthan Assembly Speaker CP Joshi withdrew his plea in Supreme Court, against the High Court order asking him to defer his decision on disqualification notices issued to former Deputy Chief Minister Sachin Pilot and 18 other MLAs. 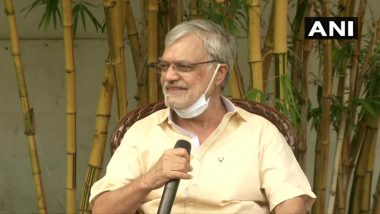 Jaipur, July 27: Rajasthan Assembly Speaker CP Joshi withdrew his plea in Supreme Court, against the High Court order asking him to defer his decision on disqualification notices issued to former Deputy Chief Minister Sachin Pilot and 18 other MLAs on Monday.

The top court accepted the Governor’s move. In his petition to the apex court, Joshi said that High Court order was "illegal, perverse” and “in derogation of the powers of the Speaker under the Constitution. Sachin Pilot Vs Ashok Gehlot: Rajasthan HC Directs 'Status Quo', Relief For Pilot Camp; All Eyes on Supreme Court Hearing on Monday.

Kapil Sibal, Rajasthan Speaker's counsel, told SC that Rajasthan HC passed a fresh order on July 24 which raised several other issues including interpretation of 10th Schedule. According to an ANI update, Sibal added that they'll weigh legal options and said that Friday's High Court order may be challenged.

The high court had last week deferred its order on their petition challenging the disqualification notices till July 24. It also asked the Speaker to extend the period given to the rebel MLAs to reply to his notice till then. The Speaker later agreed to defer any action “till the evening of July 24”. The argument presented by the Pilot camp was that they cannot be disqualified for just disagreeing with the decisions of some leaders outside the assembly. Their lawyers also argued that the lawmakers were given only three days’ time to reply amid the COVID-19 pandemic.

On Friday, Rajasthan High Court directed ‘status quo’ in the case against Congress, on the petition filed by Sachin Pilot and MLAs against disqualification notice.

(The above story first appeared on LatestLY on Jul 27, 2020 11:29 AM IST. For more news and updates on politics, world, sports, entertainment and lifestyle, log on to our website latestly.com).