Ahead of the assembly elections in Assam, the Bharatiya Janata Party (BJP) has reportedly reached a seat-sharing agreement with its allies. 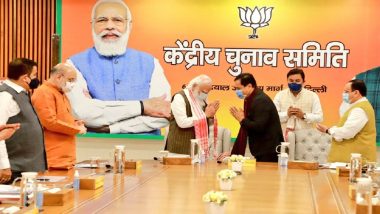 Guwahati, March 5: Ahead of the assembly elections in Assam, the Bharatiya Janata Party (BJP) has reportedly reached a seat-sharing agreement with its allies the Asom Gana Parishad (AGP) and the United People's Party Liberal (UPPL). The BJP is likely to contest 92 of the 126 seats in Assam. Of the remaining 34 seats, the AGP would get 26 and the UPPL eight, according to a report. Assam Govt to Promote All Students From Class 1 to 9 to Next Higher Classes Even if They Do Not Appear in Exams.

The report also said one or two candidates of a local party will contest on the BJP symbol. In 2016, the BJP contested 84 seats and won 60. The AGP bagged 14 of the 24 seats it contested. The UPPL could not win any of the four seats it fought on. BJP's former ally, the Bodoland People's Front (BPF) won 12 of 16 seats. The BPF has now joined the Congress-led alliance ahead of the polls. Assam Assembly Election Results From 1952 to 2016: Parties That Won Polls in The Northeastern State And Chief Ministers Over The Years.

Meanwhile, the BJP's Central Election Committee (CEC) on Thursday evening finalised the names of party candidates for the 86 constituencies in Assam that will go to the polls in the first two phases of Assembly elections on March 27 and April 1. Prime Minister Narendra Modi, BJP chief JP Nadda, Union Home Minister Amit Shah and other CEC members were present at the meeting.

Assam Chief Minister Sarbanand Sonawal, party state in-charge Baijayant Panda and other senior leaders were also present at the meeting. Assam will vote in three phases - March 27, April 1 and April 6. The results will be declared on May 2. The BJP, which came to power for the first time in 2016, is turning every stone to retain control.

(The above story first appeared on LatestLY on Mar 05, 2021 10:15 AM IST. For more news and updates on politics, world, sports, entertainment and lifestyle, log on to our website latestly.com).