Assam Assembly Election Results From 1952 to 2016: Parties That Won Polls in The Northeastern State And Chief Ministers Over The Years

Assam Assembly Elections 2021 will be held in April. Four major alliances contesting the Assam polls are UPA- United Progressive Alliance, NDA- National Democratic Alliance, URF- United Regional Front and Bodoland's People Front. Initial opinion polls seem to suggest that the BJP is expected to retain power. Voting for Assam Assembly Elections 2021 will be held in three phases on March 27, April 1 and April 06 respectively. The counting of votes will be held on May 2. 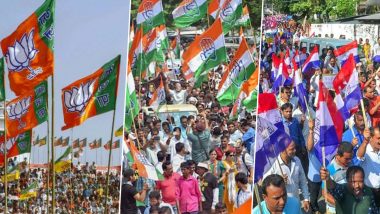 Congress ruled the state for more than 25 years, from 1952 to 1978. In the year 1978, Janta Party, with CPM, formed the government in Assam. Later in 1980, INC formed the Government with a majority, and Assam got its first woman Chief Minister Anowara Taimur. In 1982, Kesab Chandra Gogoi was made the chief minister of Assam. The INC retained in power till 1985.

Before the 1985 Assam Legislative Assembly election, Assam faced violent clashes between the indigenous population and outsiders. Extreme violence was noticed in the Nellie massacre and Khoirabari massacre. The Government of India and AASU-AAGSP leaders signed the Assam accord, and "Infiltration Free Assam" in the 1979-1985 Assam agitation ended. The agitating leaders formed a political party, Asom Gana Parishad, and won the election. Prafulla Kumar Mahanta became the youngest Chief Minister of Assam.

All eyes are now on the 2021 Assam legislative assembly elections with BJP, INC and other regional parties in the fray. Voting for Assam Assembly Elections 2021 will be held in three phases on March 27, April 1 and April 06 respectively. The counting of votes will be held on May 2.

(The above story first appeared on LatestLY on Mar 01, 2021 12:34 PM IST. For more news and updates on politics, world, sports, entertainment and lifestyle, log on to our website latestly.com).