The ruling Janata Dal (United) and the Bharatiya Janata Party (BJP) have reached an agreement on seat-sharing for the upcoming assembly elections in Bihar. 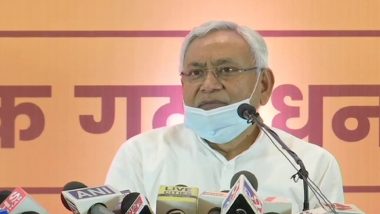 Patna, October 6: The ruling Janata Dal (United) and the Bharatiya Janata Party (BJP) have reached an agreement on seat-sharing for the upcoming assembly elections in Bihar. According to the seat-sharing deal, the JD(U) has been allotted 122 seats, while the BJP will contest 121 seats. The legislative assembly of Bihar has 243 seats. The seat-sharing deal was announced by Chief Minister and JD(U) chief Nitish Kumar. Bihar Assembly Elections 2020: Here's A Look at 2015 Poll Results And Current Strength of JD(U), RJD, BJP and Congress.

The JD(U) will accommodate Jitan Ram Manjhi's Hindustani Awami Morcha (HAM) in its quota and the BJP might give some seats to Vikassheel Insaan Party (VIP) from its share of seats. "JD(U) has been allotted 122 seats. Under that quota, we are giving 7 seats to HAM. BJP has 121 seats. Talks are underway, BJP will allot seats to Vikassheel Insaan Party (VIP) under their quota," Nitish Kumar told a press conference.

On October 3, Rashtriya Janata Dal (RJD) leader Tejashwi Yadav announced the seat-sharing deal between party, the Congress and Left. The RJD has been allotted 144 seats, Congress would contest on 70 seats and the CPM, CPI and CPI (ML) will contest on 4, 6 and 19 seats respectively. The RJD will accommodate Jharkhand Mukti Morcha (JMM) in its quota. The assembly elections in Bihar will be held on October 28, November 3 and 7. The results will be declared on November 10.

This time, the grand alliance consists of the RJD, Congress, Left and JMM. The RLSP has formed an alliance with Mayawati's Bahujan Samaj Party (BSP). Similarly, the LJP has decided to contest polls alone. The HAM has joined the JDU-BJP combine.

(The above story first appeared on LatestLY on Oct 06, 2020 05:33 PM IST. For more news and updates on politics, world, sports, entertainment and lifestyle, log on to our website latestly.com).