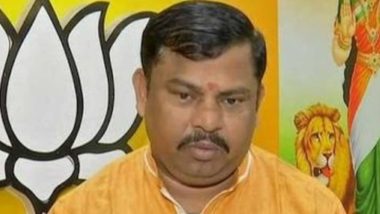 "We have banned Raja Singh from Facebook for violating our policy prohibiting those that promote or engage in violence and hate from having a presence on our platform," a Facebook spokesperson said in an emailed statement, as reported by NDTV. The social media giant added the process for evaluating potential violators "is extensive and it is what led us to Facebook's decision to remove his account". Parliamentary Panel on Information Technology Will Continue Discussion With Facebook Officials, Says Shashi Tharoor.

The Wall Street Journal, in its report last month, claimed that Facebook’s senior India policy executive Ankhi Das had intervened in internal content review processes to stop a ban on Raja Singh, who made offensive remarks against Muslims. Das, according to the WSJ report, "told staff members that punishing violations by politicians from Mr Modi’s party (BJP) would damage the company’s business prospects in the country".

The Congress has repeatedly raised what it calls "unholy nexus" of the ruling BJP with Facebook and WhatsApp. The grand old party recently alleged, "In the run-up to the 2019 Lok Sabha elections, BJP had flagged 44 rival pages to Facebook and as of August 31, 2019, 32 per cent of these pages, that is 14 out of the 44 have been pulled down by Facebook."

Interestingly, it is not just the Congress which claims the social media giant to be pro-BJP, but Union Law Minister and senior BJP leader Ravi Shankar Prasad also wrote a scathing letter to Facebook boss Mark Zuckerberg highlighting its top management's alleged bias against the "right of centre". A day before that, TMC leader Derek O Brien too wrote to Zuckerberg, complaining about its "link" with the BJP and expressing apprehension in view of the forthcoming West Bengal election next year.

(The above story first appeared on LatestLY on Sep 03, 2020 11:34 AM IST. For more news and updates on politics, world, sports, entertainment and lifestyle, log on to our website latestly.com).