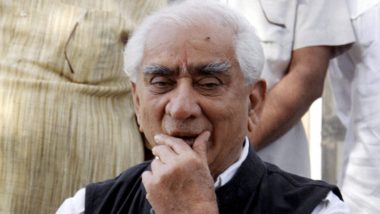 New Delhi, September 27: Jaswant Singh, one of the founding members of the Bharatiya Janata Party (BJP), died on Sunday. He was 82. Jaswant Singh, one of India's longest-serving parliamentarians, was a retired officer of the Indian Army who also served as a cabinet minister. Singh who was once considered close to former prime minister Atal Bihari Vajpayee. He was expelled from the BJP ahead of the 2014 Lok Sabha polls. Uma Bharti Tests COVID-19 Positive, BJP Veteran Contracts Virus During Himalaya Visit.

In 2014, Jaswant Singh fell in the bathroom of his residence and suffered a serious head injury. He was admitted to Army's Research and Referral hospital in Delhi for treatment. He had been in a state of coma ever since. Singh held cabinet portfolios of Finance, External Affairs and Defence. He was elected on a BJP ticket to the Rajya Sabha five times, and to the Lok Sabha four times. He also served as Leader of Opposition in Rajya Sabha from 2004 to 2009.

In 2014, the BJP decided not to field Jaswant Singh from his native constituency Barmer in Rajasthan. Unhappy with the party's decision, Singh filed his candidature as an independent. Consequently, he was expelled from the BJP on 29 March 2014. He also lost the election against the official BJP candidate. Ashok Gasti Dies at 55, BJP's Rajya Sabha MP Loses Battle Against COVID-19.

Prime Minister Narendra Modi and Defence Minister Rajnath Singh condoled the demise of Jaswant Singh. Expressing grief over Singh's death, PM Narendra Modi tweeted: "Jaswant Singh Ji served our nation diligently, first as a soldier and later during his long association with politics. During Atal Ji’s Government, he handled crucial portfolios and left a strong mark in the worlds of finance, defence and external affairs. Saddened by his demise."

"Jaswant Singh Ji will be remembered for his unique perspective on matters of politics and society. He also contributed to the strengthening of the BJP. I will always remember our interactions. Condolences to his family and supporters. Om Shanti," the Prime Minister added.

(The above story first appeared on LatestLY on Sep 27, 2020 08:52 AM IST. For more news and updates on politics, world, sports, entertainment and lifestyle, log on to our website latestly.com).