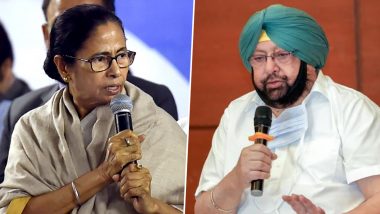 "Mamata Banerjee may not attend the Niti Aayog's February 20 meeting," a senior Trinamool Congress (TMC) leader was quoted by news agency Press Trust of India as saying. The TMC leader did not reveal the reason. Banerjee had in past skipped Niti Aayog's meetings. She had said that the government's think tank has "no financial power" and cannot support the state plans. Niti Aayog CEO Amitabh Kant Says 'Tough Reforms Difficult in India, We Have Too Much of Democracy'.

The agenda of the today's meeting includes deliberations on agriculture, infrastructure, manufacturing, human resource development, service delivery at grassroots level, and health and nutrition. "The sixth meeting will witness the entry of Ladakh for the first time, in addition to the participation of Jammu and Kashmir as a UT," said a statement from the Prime Minister's Office.

(The above story first appeared on LatestLY on Feb 20, 2021 09:30 AM IST. For more news and updates on politics, world, sports, entertainment and lifestyle, log on to our website latestly.com).