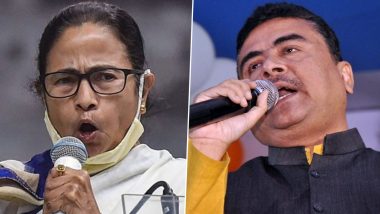 The Chief Minister had filed a petition against her one-time aide and now the Bharatiya Janata Party (BJP) Leader of Opposition, Adhikari, in the Calcutta High Court challenging his win in the election from Nandigram and prayed to the court for declaring the election null and void. Banerjee had contested and lost the election from Nandigram against Adhikari.  Mamata Banerjee Moves Calcutta High Court Challenging Suvendu Adhikari's Nandigram Win in West Bengal Assembly Elections 2021

In her petition, Banerjee alleged that Adhikari has committed corrupt practices as envisaged under Section 123 of the Act, including offences of corrupt practices of bribery, undue influence, spreading enmity, promotion of hatred and enmity amongst the citizens of India, seeking votes on the basis of religion, taking the assistance of the government officials for furtherance of the prospects of the respondent's election and booth capturing.

The plea said that there were several discrepancies and malpractices in the counting process conducted by the Returning Officer on 2 May 2021. Accordingly, Banerjee and her party colleagues had sought a recount of votes. However, such requests were rejected without due cause and the Returning Officer signed the Form 21C, declaring the elections in favour of Adhikari, the petition read.

The petition also said that upon a review of the Form 17C (Account of votes recorded and Result of counting) Banerjee discovered glaring discrepancies and non-compliances in the same.

"The election in Nandigram has been conducted in complete contravention to the constitution and the laws governing elections in India. Suvendu Adhikari has engaged in several corrupt practices that have enhanced his winning chances and materially altered Mamata Banerjee's chance of success in the election. Therefore, there are substantial grounds for declaring the aforesaid election of Nandigram (AC- 2010) null and void in accordance with Section 100 of the Representations of People Act, 1951," the petition said.

The election results for the West Bengal Assembly poll were declared on May 2, more than a month ago. As per the Election Commission, Adhikari, who joined the BJP after quitting the Trinamool, defeated Mamata Banerjee by 1,956 votes. While Adhikari had polled 1,10,764 votes, Banerjee had got 1,08,808 votes. Adhikari's vote percentage stood at 48.49 while that of Banerjee was 47.64.

Justice Kausik Chanda, who was supposed to hear the case on Friday, deferred the case till June 24.

(The above story first appeared on LatestLY on Jun 18, 2021 02:58 PM IST. For more news and updates on politics, world, sports, entertainment and lifestyle, log on to our website latestly.com).